Harpina the Heavy Hitter was a mercenary who operated in Greece during the Peloponnesian War.

Harpina had been feared ever since she was a child.  In spite of their usual habit roughhousing for dominance, the little boys in her village never dared to do so near Harpina because of her quick fists. This being the case, the earned her favor by giving her trinkets and pretty rocks, which she was happy to receive.[1]

During the war, Harpina became a mercenary and soon crossed paths with the misthios Kassandra, who accepted a bounty contract on her.[1] 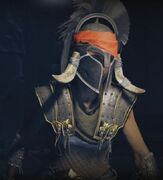