The Harpe of Perseus was a harpe marketed after the actual harpe belonging to Perseus, the legendary founder of Mycenae and a hero in Greek mythology. The sword had an unconventional hook protrusion which allowed the wielder to grapple enemies by surprise.

During the Peloponnesian War, the Spartan misthios Kassandra recovered the sword after defeating the Writhing Dread.[1]

During the 1st century BCE, the Medjay Bayek of Siwa also acquired a harpe that was allegedly Perseus'.[2] 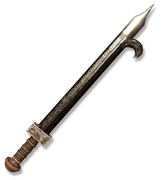 Retrieved from "https://assassinscreed.fandom.com/wiki/Harpe_of_Perseus?oldid=829087"
Community content is available under CC-BY-SA unless otherwise noted.