Hamid was the Mentor of the Indian Brotherhood of Assassins, headquartered in Amritsar.

During the Sikh Empire conquest of Kashmir in 1819, Hamid rescued a young Kashmiri named Arbaaz Mir from a meeting gone wrong and offered him a place among the Assassins. Though Arbaaz was initially deemed to be too reckless to become and Assassin, Hamid however saw the life and cunningness in him and trained him into the Order.[1]

In late June 1839, Hamid sent Arbaaz to retrieve a document in First Civilization script about the Koh-i-Noor diamond, a Piece of Eden. After explaining the diamond's legend to Arbaaz, Hamid revealed that the Koh-i-Noor was in the possession of Maharaja Ranjit Singh in Amritsar, and that the British Templars were plotting to steal it; while Ranjit Singh had been the keeper of the diamond for nine years, his successors did not share his determination to it, which the Templars sought to exploit. Hamid tasked Arbaaz with protecting Ranjit Singh from the Templars, in order to keep the Piece of Eden out of their hands.[2]

By 1860, Hamid was still the Mentor and in accordance with the strict rules of the Indian Brotherhood, ordered the execution of Arbaaz's son, Jayadeep, for incompetence due to a failure of nerves during an assassination. However, Ethan Frye, the former mentor of Jayadeep, offered a banishment alternative to Arbaaz who in turn convinced the Mentor to exile his son to England, to help the weakened British Brotherhood there and atone for his failure.[3]

While being an Assassin and theoretically tasked to defend the innocents with no regard on their race or social statute, Hamid was not above beating his servants of lower caste when they failed to reach the standards he had fixed. In 1839, his treatment of Raza Soora, one of his Shudra servants, was so harsh that Arbaaz Mir decided to purchase the mute young boy from his Mentor with the intent of freeing him later.[2]

Hamid as he appears in Assassin's Creed: Brahman 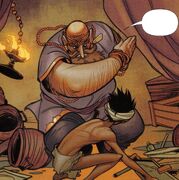 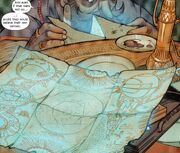 Hamid in the Helix database