Hades' Executioner was a bladed heavy weapon which belonged to the Isu Hades.

In a simulation of the Underworld created by the Isu Aletheia, the Spartan misthios Kassandra obtained the weapon after defeating Hades in combat.[1]

The blade of Hades' Executioner, a weapon in Assassin's Creed: Odyssey, is inscribed with the Greek word χᾰ́ος (kháos), meaning 'abyss, chasm, gaping void' as well as being the name of the primordial state of existence. The English word chaos is derived from it. 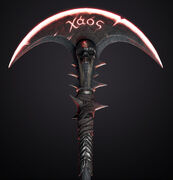 Closeup view
Add a photo to this gallery

Retrieved from "https://assassinscreed.fandom.com/wiki/Hades%27_Executioner?oldid=889205"
Community content is available under CC-BY-SA unless otherwise noted.