"My official document will read that Hades, brother to Poseidon, is a mastermind of leadership. On the contrary. His immaturity should bar him from any realm above his underworld."
―Consus Archivist.[src]-[m]

Hades was an Isu, the "mad king" who presided over the Sister Realm of the Underworld and was later revered as the Greek god of the underworld. He was the brother of Poseidon and Zeus, in addition to being the spouse of Persephone through who he was the son-in-law of Demeter.

In Greek traditions, Hades' siblings also included Hera and Hestia. His Roman and Etruscan equivalents are Pluto and Aita, respectively.

At some point, Hades became ruler of the Underworld.[1] Hades and Poseidon – the Trident King of Atlantis – were the older brothers of Zeus whom they loathed as the "golden child atop Mount Olympos".[2] Nevertheless, it was with Zeus' consent that allowed the arrangement which culminated in Hades abducting Persephone to be his bride.[1]

Persephone was given a portion of the underworld for herself that she reshaped in her own image as the realm of Elysium[3] but she was under no illusion that the paradise she had created was anything more than a gilded cage for her imprisonment by Hades.[4] And thus Hades, Persephone and Poseidon became monarchs of the Sister Realms of the Underworld, Elysium and Atlantis respectively.[5] After the creation of the human slave species for the Isu, Poseidon's son, Diaprepes, gave his three relatives crowns which could control human thoughts and behavior.[6] However, Hades was a largely passive ruler,[1] who was considered immature by some as he held little concern for the "blood quality" of those working under him.[2]

Towards the end of the Isu Era, Hades was the only leader to attend a summit of the Sister Realms by a delegation of Atlantean embassies who were voicing the concerns of Atlantis' Solar Dynamics Observatory over the threat of solar instability but he left them with the feeling he was happy to embrace annihilation.[5]

According to the mythology, Hades abducted Persephone, Demeter's daughter, and took her to his realm because he wanted to marry her.[7]

In a simulation created by the Isu Aletheia, Hades was depicted as the ruler of a fictionalised facsimile of the Underworld as seen through the lense of Greek mythology.[8] Although married to Persephone, the two had a shaky relationship and he imprisoned her in Elysium, letting her rule the realm with her friend Hekate.[3]

Hades as presented in Aletheia's simulations overwatching the Underworld, taking his duty as its ruler seriously. When Kassandra killed Cerberos, his prized guardian resulting in chaos erupting throughout his realm, Hades impatiently demanded Kassandra to fix it at once. Hades is manipulative, cunning, ruthless and narcissistic, but also displays quite a level of intelligence. He enjoys playing with the minds of his inferiors through lies and bribes in order to get what he wants. A notable example being he successfully manipulated Kassandra into taking up the job of cleaning up the chaos she caused in the Underworld by leading her to believe that he would help her in exchange.

Like most Isu he also sees human beings as inferior and insignificant beings, as illustrated when he casually rubbed Kassandra’s head to silence her mid-sentence when he grew tired of listening to her. He and Poseidon also placed a bet on each of Kassandra’s mission as if regarding her as a form of entertainment. Despite that, he generally does not act rude towards them, as seen when he apologized to Kassandra for his sudden outburst at her.

It is shown that he hates people who commit suicide and calls them “uninvited guests”. He keeps them in the Forest of Oizys, a realm of dead trees separated from the rest of the Underworld, and hangs their bodies from the branches of the trees.

In the simulation of the Underworld, Hades displayed a number of supernatural abilities. Hades claimed to be immortal, and exhibited the ability to teleport anywhere he chose within the Underworld as well as levitate. Hades could also condemn existing souls within the Underworld to further torment: this happened for example to a greedy person who had cheated its citizens of their drachmae, and thus Hades damned him to be fed to Hades' hounds. Hades was also highly skilled in the use of his scythe and could dash with superhuman speed during combat as well as release devastating blows. Hades could also manipulate reddish energy which allows him to conjure up "apples", generate spatial pressure around his opponents to move them akin to telekinesis and even use the energy as an offensive projectile in order to decimate his enemies.[8]

Given his nature, Hades was rarely celebrated, or built temples for. However, a temple was dedicated to him in Elis City in Elis during the 5th century BCE.[7]

Eventually, his name came to also signify the underworld itself. The Cerberus is regarded as Hades' hound, and when the god was depicted, Cerberus was there, too. In Messenia, a bay was dedicated to the god.[7] 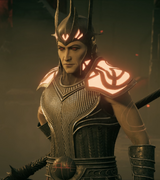 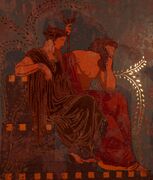 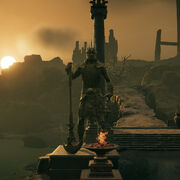 A statue of Hades in the Underworld