"I will burn your city, your land, your self."
―Hülegü Khan.[src]

Hülegü Khan (Mongolian: ᠬᠦᠯᠡᠭᠦ ᠬᠠᠨ; c. 1218 – 1265; English: Hulagu Khan) was a Mongol ruler who conquered much of southwest Asia. He was the grandson of Genghis Khan and a brother of Kublai Khan. Hülegü established a seat of power in Persia, then went on to sack Baghdad and Masyaf, and very nearly destroyed Damascus.

In 1256, Mongol forces under Hülegü's command attacked various Assassin fortresses throughout the Levant, in vengeance of Genghis Khan's murder at the hands of the Levantine Assassin Darim Ibn-La'Ahad and the Mongolian Assassin Qulan Gal, as well as an attempt on his own life.[1] On 15 December 1256, Hülegü Khan conquered the fortress of Alamut, without the Assassins firing a single shot in its defense.[2]

On 12 August 1257, Hülegü besieged the Levantine Assassins' headquarters in Masyaf, hoping to ultimately destroy the Assassins. The Mentor Altaïr Ibn-La'Ahad employed his Apple of Eden to summon phantoms to fight the Mongols,[3] but Hülegü Khan was able to see through the illusion using his grandfather's Sword of Eden.[2] However, Masyaf was simultaneously abandoned by the Assassin Order, and the remaining Assassins fled to different locations around the globe before the siege ended.[1]

Hülegü's campaign was swift and brutal, and it was only the intervention of Berke Khan that kept his vengeance in check. Hülegü was killed by the Assassin Nergüi several years later, in an act of revenge for the fall of Masyaf.[2] Hülegü firing a bow on horseback 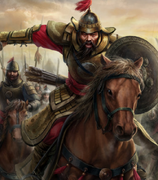