Gunpowder, also called black powder, is an explosive chemical mixture that was widely used in firearms by humans.

Gunpowder is popularly believed to have been first discovered by accident around 850 by Chinese alchemists, but others credit the Arabs with this invention. For their part, the Chinese had sought to concoct an elixir of life when they created the volatile substance.[1]

The Song dynasty recognized its destructive potential and ingeniously fashioned weapons which propelled projectiles using the explosive power. These became the earliest cannons, and they employed them against the invading Mongol Empire during the 12th century.[1] From China and Mongolia, the technology spread west to Western Asia and thence into Europe.[1]

In 1304, the Arabs conceived the first firearm, essentially a handheld cannon, and by the following century, gunpowder was so well-known in Europe that gunpowder-powered cannons had become a mainstay of the French and English armies.[1] Notwithstanding this, gunpowder became an essential component for bombs, which the Ottoman Empire and Ottoman Brotherhood of Assassins relied extensively on.[2] A common 15th century recipe for gunpowder was saltpeter, sulfur, and charcoal, and this was the one used by the Italian Brotherhood for their smoke bombs.[3]

The lethality and great range of firearms led to the gradual phasing out of traditional melee weapons like swords and pikes over subsequent centuries. In Europe, they became the primary type of weapon fielded to state armies in the 18th century, and during campaigns, gunpowder was an indispensable part of military supplies. European Naval warships, barracks, forts, and supply convoys almost always carried gunpowder stockpiles, a hazard that could be exploited by enemies.[4][5][6]

During a Venetian siege of Athens in 1687, a cannonball struck gunpowder that was housed within the Parthenon, destroying a substantial part of the ancient landmark.[7] A frequent tactic in naval warfare of the 18th century was to target gunpowder barrels aboard enemy ships whenever they happened to be exposed.[4][5][6]

A variety of gunpowder was manufactured throughout the world. In the early 16th century, the three most common types that could be found in Constantinople were Indian gunpowder, Arabic gunpowder, and British gunpowder in increasing potency. Fitted into average handheld bombs, they bore blast radii of two metres, three metres, and four metres respectively. These three types of gunpowder were the ones utilized by the Ottoman Assassins, who recognized that the weaker types of gunpowder were preferable in situations where the risk of civilian casualties was high.[2]

In Assassin's Creed: Revelations, gunpowder is an ingredient in bomb crafting. There are three types of gunpowder: Indian gunpowder, Arabic gunpowder, and British gunpowder, producing bombs with blast radii of 2 meters, 3 meters, and 4 meters respectively.[2]

A pile of gunpowder 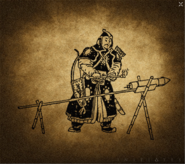 A Chinese drawing of a soldier lighting a rocket

A gunpowder magazine during the American Revolutionary War