Assassin's Creed Wiki
Register
Don't have an account?
Sign In
Advertisement
in: Articles that need updating, Spears, Spears of Eden,
and 4 more

Gungnir was a Spear of Eden created by the Isu blacksmith Ivaldi.

From its creation until the Great Catastrophe, this Piece of Eden was wielded by Odin himself before it was lost within Goinnhellir mountain near to the entrance of the Yggdrasil Chamber. Millennia later, it was retrieved by Odin's reincarnation, Eivor Varinsdottir.

During the Isu Era, the Isu Odin wielded Gungnir in battle. He carried it with him to meet his end during the Great Catastrophe.[1]

After the Great Catastrophe, Gungnir was trapped within Goinnhellir. It lay there until 877 when Eivor Varinsdottir, Odin's reincarnation, retrieved it while detouring away from her brother Sigurd on their way to the Yggdrasil supercomputer.[2] 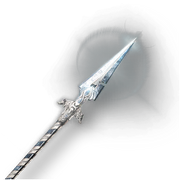