After Nicholas' son Alexei became sick from hemophilia, a family friend advised him to ask for the help of Rasputin. Rasputin agreed to do so, because he knew that Nicholas was in possession of a Staff of Eden, known as the Imperial Sceptre. After successfully "healing" Alexei, Rasputin became a trusted friend, and even gave advice on the decisions the royal family made.[1]

Eventually, Rasputin came into possession of the Staff, and took it to Tunguska for the Templars to experiment with.[2] Despite this, following the interrogation of the Templar Dolinsky, Nikolai Orelov and several other Assassins destroyed the facility, with the assistance of Nikola Tesla; the Imperial Sceptre was also destroyed in the resulting explosion. However, Rasputin managed to recover a piece of the destroyed Staff, and wore it around his neck for the rest of his life.[3]

In 1914, Rasputin traveled to his home in Pokrovskoye, Siberia to visit his wife and children, and his disciple Khioniya Guseva joined him. He arranged to meet with Guseva outside the village's church, but after having done so, Guseva charged towards him and slit his stomach. Due to his injuries, Rasputin's intestines fell out and he clutched at them, yet he managed to smile at Guseva. Following this, Rasputin used the Staff shard from around his neck to make her mutilate herself. Consequently, Guseva was heavily deformed for the rest of her life, while Rasputin himself was somehow healed miraculously.[4]

"Not so immortal after all, henh? Degenerate filth."
―Nikolai Orelov's accomplices, upon seeing Rasputin's corpse.[src]-[m]

Rasputin was assassinated by Felix Yusupov and his co-conspirators on 29 December 1916. He was reportedly poisoned and shot twice, but managed to make his way outside, where he was shot again and clubbed to death. His body was dropped in a river outside Petrograd, but was recovered by police and buried near the city.[1][5] 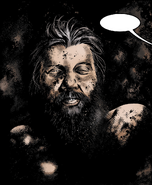 The corpse of Grigori Rasputin

The fragment of the Imperial Sceptre found on Rasputin's body