Greek fire was a powerful Byzantine incendiary weapon that was a closely guarded military secret. Its true composition remains unknown to this day, despite multiple theories. Famously, it was reputed to burn more fiercely on contact with water, making it particularly valuable in naval warfare.

Greek fire was both used by ships, and during the struggle for control of Assassin Dens in Constantinople during the Ottoman Civil War.

Greek fire was first used by the Byzantine Emperor Leon III's army, when enemy vessels laid siege to Constantinople in the year 717. In the battle, the napalm-like substance burned through the enemy fleet, forcing them to call off their attack and flee west. [citation needed]

In 1511, the Assassin Ezio Auditore da Firenze used Greek fire in order to destroy several ships, which prevented him from leaving the city.[1] The Ottoman Assassins also mounted Greek fire weapons along the barricades they used to defend their dens from Templar attacks.[2] 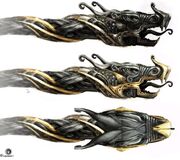