The Golden Flintlock Pistols, also known as Edward's Pistols,[1] were the personal firearms of the pirate-Assassin Edward Kenway.

The Dutch merchant Milo van der Graaff rewarded Edward with these pistols after he completed all of Milo's naval contracts in the West Indies.[2]

Decades later during the French and Indian War, the pistols passed into the hands of the Templar Shay Cormac.[1]

*Must be unlocked through Uplay

The Golden Flintlock Pistols are the most powerful pistols available to the player in Assassin's Creed IV: Black Flag and are unlocked by completing all naval contracts. The only character who is able to completely nullify the pistols' one-hit kill potential is El Tiburón due to his heavy armor. Accordingly, they were canonized as the personal pistols of Black Flag's main protagonist, Edward Kenway, in the following instalment, Assassin's Creed: Rogue. There, they are referred to as Edward's Pistols and can be unlocked through Uplay for 30 points. The pistols between the two games are identical in appearance but are weaker in Rogue, having average damage, stun, and range compared to other pistols in the game.

In Black Flag, the pistols aren't available for mission replays through the progress tracker. 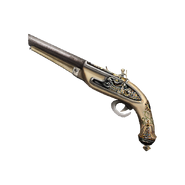 Retrieved from "https://assassinscreed.fandom.com/wiki/Golden_Flintlock_Pistols?oldid=861126"
Community content is available under CC-BY-SA unless otherwise noted.