The Gladiator (harvested from: Anacletos) was an Animi Avatar used by Abstergo Industries for the second stage of the Animi Training Program, used to train their recruits. He was unlocked through a system update, and wielded a spatha as his specialty weapon, which was a Roman cavalry sword.

The Gladiator had several unique moves:

Carefully approaching his target from the front, the Gladiator unsheathes his spatha and, before his victim can react, brutally smashes the sword's hilt against their face. Caught off-balance, they can only cry out in surprise when the spatha is driven into their stomach, killing them. The Gladiator then roughly shoves them off the blade, watching his dead victim fall to the ground as he sheathes his weapon.

Nearing his target from behind, the Gladiator unsheathes his sword, before suddenly slashing them across the back of their legs, causing them to drop to their knees. He then follows through with his attack by wedging his spatha into the right of his victim's waist, before pushing them off with his foot and leaving them bleeding to death.

Rushing up to his target, the Gladiator savagely grasps their throat and squeezes cruelly. He then lifts his victim off the floor and unsheathes his spatha, before sweeping their legs from under them and dropping them on the floor. Raising his sword, the Gladiator viciously slashes his sword down, cutting their stomach open and leaving them for dead.

Forgoing a stealthy approach, the Gladiator runs up behind his target and withdraws his spatha from his belt. Wielding his sword one-handedly, he skilfully swings it into his victim's leg, slashing a deep wound that unbalances them slightly and causes them to turn in agony as the Gladiator fluidly spins beside them to build up momentum. Once he fully rotates himself, he savagely chops his spatha into their face, sending them hurtling sideways to their death as he sheathes his sword.

Grabbing his seated target's foot, the Gladiator drags them off the bench until their head rests against it. Before his victim can do anything to defend themselves, he forcefully kicks them in the face, violently sending their head backwards and breaking his target's neck on the bench behind them.

With his target in sight, the Gladiator leaps from above and draws his spatha in mid-air. While his target looks up and spots him, they are unable to stop the Gladiator crashing down on top of them, as gravity aids his heavy armor. With his sword, he stabs his victim's chest deeply, impaling their heart and killing them instantly. From there, the Gladiator stands up and sheathes his sword away, leaving his target dead.

The Gladiator could be customized in many different ways:

The Gladiator, with the Privateer, the Corsair and the Brigand

The Gladiator about to kill the Guardian in Souk

Concept art of the Gladiator 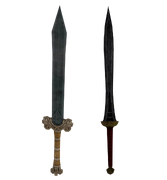 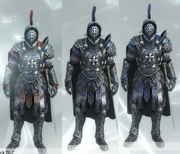