In 1479, Mocenigo ended Venice's with the Ottomans through the Treaty of Constantinople. The treaty gave the Ottomans Venetian overseas territory and an annual tribute of 10,000 ducats.[1]

Mocenigo also started the Salt War in 1482, when he attacked Ferrara. The latter had challenged Venice's ownership of several salt mines, which Venice used as a pretext for territorial expansion. Although Pope Sixtus IV initially fought alongside Venice, he changed sides upon realizing the city's territorial ambitions. In 1484, the war ended, with the duke of Ferrara, Ercole I d'Este, being forced to sign the Treaty of Bagniolo, which ceded Rovigo to Venice. This enlarged the Venetian Republic to its greatest size ever. Upon reading the terms of the treaty, Sixtus flew into a rage and died the following day.[1]

Silvio: "So, how goes things at the palace?"
Carlo: "Honestly, it's difficult. Mocenigo keeps his circle close. I have tried to lay the groundwork, making suggestions, but he has other voices at his ears."
―Templars speaking of recruiting Doge Mocenigo.[src]

In the early 1480s, as part of their plot to control all of Venice, the members of the Templar Order realized that it was crucial to gain the allegiance of Doge Mocenigo.[2]

A Templar member of the Council of Ten, Carlo Grimaldi was assigned to frequent the Palazzo Ducale, to gain Mocenigo's friendship, and to subtly attempt to recruit him to his Order's cause. However, the Doge did not fully trust Carlo, and listened only to the voices of the advisors in his inner circle.[2]

Carlo remained "two steps from the Doge" day and night, and attempted to cater to his every desire. He ordered for the delivery of the "finest jams from the orchards of Sardinia, the latest fashions from Milano", but Doge Mocenigo likely only saw this as the acts of a flatterer, and was not impressed.[2]

"The plan is this: Doge Mocenigo will die tonight. And once the deed's been done, Marco shall take his place."
―Rodrigo Borgia.[src]

Though Carlo was convinced that he was only a few days away from gaining Doge Mocenigo's support, in September 1485, the Templars' time had run out. During a brief meeting at the Piazza di San Marco, the Templars discussed the fact that the Assassin Ezio Auditore da Firenze had arrived at the city, and threatened the success of their plan.[2]

Rodrigo Borgia, Grand Master of the Italian Templars, ordered for the immediate assassination of Doge Mocenigo, and bade Carlo kill him without any bloodshed, and make it "appear to all that he goes quietly." The Templars discussed a suitable poison, and decided upon cantarella, a variation of arsenic that was difficult to trace.[2]

That night, on September 14, Carlo arranged for a chess game between himself and Doge Mocenigo. Using his free range of the palace, he entered the kitchen and slipped the cantarella into the Doge's drink, before calmly joining him for the game.[2]

Ezio Auditore, who had overheard the Templars' plans, attempted to save the Doge's life. However, even after using Leonardo da Vinci's Flying Machine to enter the well-fortified Palazzo Ducale, the Assassin arrived too late. Even as Ezio called out for the Doge not to drink the wine, Carlo proclaimed that the Doge was already dead.[2]

As Doge Mocenigo began to cough up blood, Ezio chased Carlo out into the courtyard and killed him, avenging the Doge. Miraculously, the Doge managed to stumble into the courtyard, but, delirious from the poison, he yelled out "You... You killed me? You killed ME?!" before collapsing to his death. As a result, Ezio was mistakenly labeled as Doge Mocenigo's killer, and pursued by the palace guards out into the city.[2]

Following his demise, Doge Mocenigo was succeeded by the Templar Marco Barbarigo.[2]

A render of Mocenigo's face 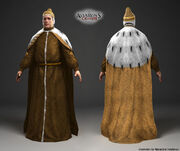 Front and back renders of Doge Mocenigo

Retrieved from "https://assassinscreed.fandom.com/wiki/Giovanni_Mocenigo?oldid=810079"
Community content is available under CC-BY-SA unless otherwise noted.