Assassin's Creed Wiki
Register
Don't have an account?
Sign In
Advertisement
in: Articles in need of sources, Articles that need updating, 1757 births,
and 12 more

"On the outside the colonies are dirty and dangerous, unforgiving and uncivilized. But on the inside they glow. And that is why I am here. To learn. I want to return home able to touch France's black heart and make it glow once more."
―Lafayette to Connor, on why he joined the American Revolutionary War.[src]-[m]

"Lord knows my journey was far from certain. The trials we suffered getting here were strange and many."
―Lafayette reminisces about his journey to America.[src]-[m]

Lafayette was born and raised as a French aristocrat, and pursued a military career when he was young. In 1777, the Continental Congress requested French aid in the American Revolutionary War. Lafayette volunteered, eager to join the Patriot cause for freedom and independence from the British, France's longtime rival. However, Louis XVI of France refused to allow Lafayette to leave his post in the French Army, and even threatened to confiscate his newly purchased ship, La Victoire.[1]

Lafayette journeyed to Spain to find another means of reaching the colonies, during which he was closely pursued by British spies, who intended to capture and arrest him. Eventually, Lafayette found passage on board a ship destined to America by disguising himself as a woman to avoid detection.[1]

"One day, when all this is over, I will invite you to Paris to stay with me and my family. She is the most beautiful city in all the world, Connor, full of art and culture, women and wine."
―Lafayette to Connor.[src]-[m]

Upon his arrival, the Congress were concerned that Lafayette was only participating for fame and glory. To prove his sincerity and as a show of good faith, Lafayette offered to be commissioned for free, and the short-funded Congress agreed. Lafayette was commissioned into the Continental Army and was assigned as a field secretary to George Washington with the rank of Major General, acting as Washington's second-in-command for most of the war.[1]

During the Battle of Brandywine, Lafayette demonstrated excellent leadership qualities and aptitude in battle. Despite the fact that the Patriots were defeated in the battle and that he was wounded, Lafayette was commended for organizing and leading an orderly retreat which saved hundreds of lives.[1]

Lafayette became a trusted subordinate and good friend to Washington. He also met Washington's most trusted ally, the Assassin Connor, in the Valley Forge encampment. The two discussed the progression of the war. Lafayette reminisced about his experiences and expressed that one day he could to invite Connor to France once the war was over.[2]

"I grant you my finest soldiers to serve as your personal guard. There is nothing they will not do to ensure you are victorious. Bonne chance mon ami."
―Lafayette to Connor, 1778.[src]-[m]

On June 28, 1778, Lafayette led the contingency forces during the Battle of Monmouth, in an attempt to stop the British Army's march from Philadelphia to New York. General Charles Lee took command of Lafayette's forces, but inexplicably left, leaving the battalion unorganized and unprepared. The advancing British Army soon after arrived, however Connor offered to help. Lafayette offered his personal guard to follow Connor's orders. The group proceeded to hold a defensive line against the Redcoats, while Lafayette organized a retreat. Both their efforts saved many lives in the Continental Army.[2]

Afte holding off the British, Connor and Lafayette's remaining soldiers withdrew and regrouped with Washington's forces. Connor revealed that Lee was a traitor, explaining that he abandoned his post to force Washington to suffer heavy losses in battle to make him appear incompetent, or get killed in battle, thereby removing him from command. Lafayette vouched for Connor's allegation against Lee, citing that Lee was acting strangely. In the aftermath of the battle, Lee was charged of treason and dishonorably dismissed from his post, although he was spared execution, much to Connor's chagrin.[2]

Lafayette soon after returned to France on behalf of the Continental Army, where he requested and negotiated that the French provide more troops and ships for the Patriots. He succeeded and returned to America with French reinforcements, with the ships greatly bolstering the American navy.[1]

"It will depend greatly on who is chosen to lead them. A man of humble means - who has worked to earn his place... I think a man like that is less likely to dream of thrones."
―Lafayette to Stephane Chapheau, regarding the Patriots, 1781.[src]-[m]

In 1781, Lafayette and General Anthony Wayne were ambushed by British forces in Virginia. Connor sent his recruits to help him, assassinating British officers so the Patriots could retreat from the Battle of Green Spring.[2]

Lafayette later visited the Davenport Homestead to help Connor gather a fleet to breach Fort George in New York. Connor participated in the Battle of the Chesapeake, earning the trust of French Admiral François-Joseph Paul de Grasse. With the support of the French Navy to create a diversion, Connor planned to infiltrate Fort George and assassinate Charles Lee. Upon reaching New York, Lafayette and Stephane Chapheau greeted Connor and showed him the underground tunnel they had cleared into the military district.[2]

While underground, Stephane and Lafayette discussed how having a King as a ruler would result in tyranny and hypocrisy, hence they argued that the people should have the right to elect their leaders, thus ending the threat of a monarchy.[2]

After the war, Lafayette returned to France and took part in the French Revolution, bringing democracy and radical national reform to France.[1] On 15 July,[3] 1789, Lafayette was appointed as the new Commander of the National Guard,[4] and on 28 February, 1791, he led them in the defense of King Louis XVI at the Tuileries Palace during the Day of Daggers, in which the Guard fought with over 400 nobles who also sought to defend the king and had been mistaken Jacobin for conspirators.[5] However, he went into exile because he advocated a constitutional monarchy, instead of the empire that had emerged from the chaos in France.[1]

Lafayette returned to America in 1825 to celebrate the 50th anniversary of the revolution, during which he was hailed and honored as a hero during the war. Lafayette died of pneumonia in 1834, and after his death, he became even more of a hero in America. He was given full military salutes by all United States forts and ships when news of his death reached the country, and several towns, counties, and public works in America bear his name.[1]

After American troops landed in France in World War I, the United States colonel Charles Stanton visited Lafayette's grave, uttering the famous phrase, "Lafayette, we are here". Lafayette was also posthumously honored with official American citizenship in 2002, one of the few foreign citizens to receive such an honor.[1]

Lafayette was a sophisticated, cultured and noble man, as well as a charismatic and competent military officer. He demonstrated strong determination by going to great lengths such as disguising himself as a woman and offering to be commissioned for free. Despite his privileged lifestyle as a French aristocrat, Lafayette dedicated himself to revolutionary causes. Lafayette was patriotic and had a strong desire to preserve his culture but also bring about reform both to the Thirteen Colonies and his homeland of France.

Gilbert du Motier is a historical figure introduced in the 2012 video game Assassin's Creed III, where he was voiced by Vince Corazza.

Lafayette greeting Connor at the Battle of Monmouth

Lafayette with Connor in the tunnels beneath New York 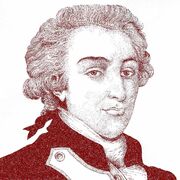 Lafayette in Who's In Your Blood?