Georges Jacques Danton (1759 – 1794) was a French lawyer and a leading figure of the early French Revolution. He was a moderate Jacobin, and eventually started turning against Jacobin leader Maximilien de Robespierre. He was guillotined in 1794 on accusations of venality and leniency to enemies of the revolution.

At the beginning of the revolution, Danton held little influence. A member of the Cordeliers Club and a close friend and ally of Camille Desmoulins, he was a regular patron of the Café Procope. After failing to be elected to the Legislative Assembly, he was given a subordinate position in the Paris Commune. He aligned himself with the Jacobin Club, eventually becoming a part of The Mountain. Danton also became an ally of the Assassin Order at some point. Following King Louis XVI's capture after the flight to Varennes, Danton called for his execution. However, he would later retract this position and simply call for his abdication.[1]

Spy: "King Louis will be back in Versailles within the week."
Danton: "Hah! Over my dead body."
—Danton being confronted by an Austrian spy, 1792.[src]

Although Danton's role in overthrowing of King Louis on 10 August 1792 is unclear, he became the French Minister of Justice that day. He took on Fabre d'Églantine, who had been involved in shady dealings with him, as his secretary.[1]

The Girondist government had declared war on Austria and Prussia in the spring of 1792. The forces of the Duke of Brunswick threatened Paris, and the Comte and Vicomte de Gambais led an Austrian spyring which leaked intelligence on the city's defenses. On 2 September, Danton spoke before the National Convention, calling for "more audacity" in the face of overwhelming odds against Austria.[1]

Later that day, Danton pretended to be a member of the spyring, being approached by one of the Austrian spies. Danton then called on his guards to arrest the spy. The spy soon eliminated the guards however, and Danton dueled with him. At this time, Arno Dorian and a team of Assassins arrived and killed the spy. After holding off the other spies, the Assassins were directed to steal documents from the spies before they could reach a courier. The Assassins then killed the Comte and Vicomte de Gambais, along with their accomplices.[2]

Danton's speech was credited with rallying the troops. On 20 September, the French Army defeated the Austrians at the Battle of Valmy.[1]

Danton's management of the Ministry of Justice was criticized by the Girondists, and he was accused of causing the September Massacres, although no evidence supports this. Troughout the revolution, Danton was alleged to have purchased national assets to consolidate his personal fortune, while playing both sides of the revolution. After his time as Minister of Justice, he would never render accounts, and 200,000 livres vanished during his tenure.[1]

"My old friend, you must be mad! You can't sic this butcher on deputies of the Convention!"
―Danton confronting Robespierre on his arrests of the Girondists, 1793.[src]

As the Jacobins rose to power following the fall of the monarchy, Danton became a central political figure along with Maximilien de Robespierre and Jean-Paul Marat, helping to found the Committee of Public Safety. During this time, they came under the criticism of Jean-Baptiste Louvet. Danton and Robespierre rebuked this criticism, however.[2]

In the summer of 1793, Robespierre put out a warrant for the arrest of every Girondist. Upon learning of this, Danton protested, wishing to reconcile with the Girondists. He confronted Robespierre and the National Guard Commandant François Hanriot in the former's office. Danton criticized Robespierre and referred to Hanriot as a "butcher", before taken away by the guards.[2]

As the revolution went on, Danton called for less violence and the sparing of further bloodshed as a result of the Terror. Robespierre and Louis Antoine de Saint-Just accused him of being excessively moderate and a traitor to the revolution. Several friends of Danton printed an article comparing Robespierre to a brutal dictator.[1]

Danton was reputedly corrupt and willing to change sides in the revolution if it meant that it profited him. He remained steadfast in his opposition to Robespierre and the leading Montagnards and refused to believe that they would move against him, claiming that "they wouldn't dare". Nonetheless, on 30 March 1794, Danton, Desmoulins and 30 other so-called "indulgents" critical of the Terror were arrested. As Danton was put in his cell in the Luxembourg Palace, Robespierre personally visited him, gloatingly showing his former ally personal letters found by Hanriot.[2]

While Danton, Desmoulins, Marie-Jean Hérault, Pierre Philippeaux and d'Églantine were sentenced to be guillotined, Robespierre planned to arrest Danton's friends by using the letters as evidence.[2]

"You follow us shortly, Robespierre! Your house shall be beaten down and sowed with salt!"
―Danton to Robespierre before his execution, 1794.[src]

On 5 April, Danton, Desmoulins, d'Églantine, Hérault and Philippeaux were driven to the Place de la Révolution on a cart. As they drove by Robespierre's house, the latter watched them proudly. Danton shouted to him "Your house shall be beaten down and sowed with salt". While awaiting execution, Danton reassured Desmoulins that their deaths would not be in vain, and that the revolution would continue. during his execution the crowd supported him, but the guards insisted on opening fire against the protesters, confounding them for traitors.[2]

Arno and a team of Assassins then arrived to rescue them, but Danton declined, explaining that his death would ruin Robespierre's reputation and cause the latter's fall. However, he did request that they protect his friends and recover the letters.[2]

As the Assassins protected his friends, Danton was sent to the platform to be guillotined after Desmoulins. He turned to Charles-Henri Sanson, the executioner, and said "Show my head to the people. It is worth seeing". Moments later, Danton was beheaded.[1]

"Robespierre natters on about freedom and mercy while thousands go to the guillotine. If Danton were alive to see this, he would choke on his own grief."
―A critic of Robespierre, 1794.[src]

Following the death of Danton and the indulgents, Robespierre was able to govern France with little opposition. Among critics of the latter however, Danton was considered a man of reason and something of a martyr. Robespierre fell from power within months, ending the Reign of Terror.[2]

Despite his excesses and corruption, Danton has been portrayed in a more positive light by historians than revolutionaries such as Robespierre.[2]

A painting of Danton from 1792 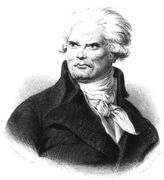