Assassin's Creed Wiki
Register
Don't have an account?
Sign In
Advertisement
in: Articles in need of sources, Individuals, 1162 births,
and 8 more

"A dark tide rises to the east – an army of such size and power that all the land is made quick to worry. Their leader is a man named Temujin, who has adopted the title Genghis Khan. He sweeps across the lands, conquering and subsuming all who stand in his way."
―Altaïr Ibn-La'Ahad's Codex, page 29.[src]

Utilizing a Sword of Eden, Genghis Khan established what would later become the largest contiguous empire in history.[1]

By the year 1217, the Mentor of the Levantine Brotherhood of Assassins, Altaïr Ibn-La'Ahad, correctly suspected that Genghis Khan's rise to power was due in part to a Sword of Eden. Thus, Altaïr, his wife Maria, and his son Darim traveled to Mongolia intending to assassinate Khan and retrieve the Piece of Eden.[2] In 1227, they located Genghis Khan in Xingqing around the time his forces were besieging the city; the Mongolian Assassin Qulan Gal shot Genghis Khan's horse with an arrow, dismounting the Mongol Emperor and providing Darim the chance to kill him[3] with a crossbow bolt.[4]

Genghis Khan's grandson, Hülegü Khan, later destroyed most of the Assassin strongholds in the Levant after a failed attempt on his life in 1256, effectively erasing the Levantine Assassins' power.[5]

After his death, a literary work on Genghis Khan and his family was written. A copy of the work was later purchased by Ezio Auditore in Constantinople in the 16th century.[6] 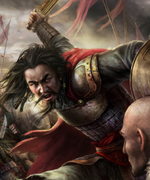 Genghis Khan utilizing the Sword of Eden in combat 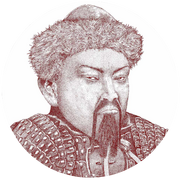 Potrait of Genghis Khan as shown in Who's In Your Blood?