Assassin's Creed Wiki
Register
Don't have an account?
Sign In
Advertisement
in: Articles in need of sources, Towers, Landmarks in Constantinople

One of Constantinople's most famous landmarks.

The Galata Tower, or the Galata Kulesi, is a medieval stone tower located in the Galata District of Constantinople, north of the Golden Horn.

One of the city's most recognizable landmarks, it is a tall, cone-capped tower that dominates the city skyline and affords a panoramic vista of old Constantinople and its surrounding area.

Galata Tower was originally constructed by Genoese settlers in 1348 as a part of a larger defensive compound consisting of towers, walls, and gates that protected Constantinople's northern border throughout the Middle Ages. However, the complex eventually became obsolete and was abandoned, most of which were dismantled by the time of the Ottomans. However, the main tower was still used to spot fires throughout the city.[1]

Upon arriving in Constantinople in 1511, the Assassins Ezio Auditore da Firenze and Yusuf Tazim raced each other to the top of Galata Tower. With each using their Hookblade, they managed to scale the landmark in less than a minute.[2]

Later, upon learning that one of the Masyaf Keys was stored in the tower by Niccolò Polo, Ezio entered Galata Tower to search for the artifact, only for the interior to collapse. Fortunately, Ezio was dropped into the caverns below and quickly located the key.[2]

In 1512, Ezio negotiated with Prince Ahmet to release Sofia Sartor for the keys. However, the Assassin Azize was held hostage atop the tower in an identical dress to deceive Ezio. After discovering the deception, Ezio located the real Sofia a short distance away and leapt from the tower, using his parachute to reach her.[2]

During the reign of Murad IV in the 17th century, a man named Hezârfen Ahmed Çelebi strapped himself into a homemade glider one fine day in 1632, and threw himself off the tower's cornice. This act of flight took him over Galata and across the Bosphorus waterway, landing safely on the shores of the Asian continent. Believing this to be supernatural, Murad paid Hezârfen a bag of gold coins and banished him to Algeria.[1]

Ezio and Yusuf scaling the Tower

An alternate view of the Tower 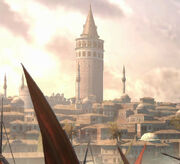