"Welcome to Galata district. For centuries it has been a home to orphans from Europa and Asia alike. You won't find more diversity anywhere else in the city."
―Yusuf Tazim.[src]

Galata was one of the four major districts of Constantinople during the Renaissance. It housed the base of the Ottoman Brotherhood of Assassins.

Residing across the waters of the Golden Horn and separated from the rest of the city, it was Constantinople's most cosmopolitan district. It was full of varied architecture, drawing from Italian, Ottoman, Byzantine, Ancient Greek, and Asian influences; it is more or less the rich district of Constantinople.

Alongside Galata Tower, several bomb crafting stations, black market dealers, a book shop, a tailor, a blacksmith, several doctors and a bank were located in the district.

In 2012, Abstergo Industries used a virtual representation of the location in the second stage of the Animi Training Program. 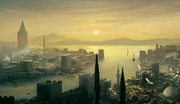 Concept art of a street in Galata

A match of Artifact Assault on the Galata map 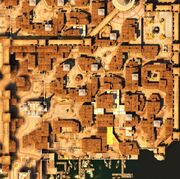