The Gae Bolg was the personal spear of the Irish mythological hero Cú Chulainn and was purportedly made from the bones of a sea monster.

The spear had the appearance of a bident, having a tip of two-prongs. The prongs themselves were relatively wide and had an array of rather sharp pointed barbs at the base of the spearhead, as well as a few smaller barbs at the opposing end. It also stood at a height slightly taller than the average person.[1]

The spear possessed special abilities as well, being able to shock the users' enemies with lightning after every third consecutive hit.[1]

Cú Chulainn was gifted Gae Bolg[2] and wielded it for most of his life until he met the ancient Fomorian being known as Balor. The hybrid was slain in the resulting battle, but not before lodging his spear deep in Balor's back, though the giant took care to invisibly cloak the spear haft so as to conceal his weak spot from future heroes who sought to kill him. [1]

Some time later, in his fortress, Balor was confronted by the Asgardian Isu Odin, the leader of the Æsir, who wanted the power lodged in the ancient spear. The two Isu fought, with Odin turning out victorious. With Balor's defeat, the invisibility cloak he used to conceal Gae Bolg fell away and exposed the spear haft lodged in his back. Odin ripped the spear of his back and exited Dun Báhlair with the Gae Bolg in hand.[1]

By the 9th century, the spear was embedded within a ritualistic monolith just outside the hut belonging to the druidic priestess Deirdre Na Linni in Asfinn, Ireland. During her visit to the country in 882 CE, the Viking jarlskona Eivor Varinsdottir of the Raven Clan consumed a psychoactive mixture prepared by Deirdre from amber shards[1] collected from the Children of Danu,[3] a pagan cult that was run by fanatical druids.[4] As a reincarnation of Odin herself, the drink sent Eivor on a hallucinogenic vision where she fought and defeated a manifestation of Balor for possession of the spear. Eventually, as Eivor grasped the spear with both hands and pulled it, the vision ended and she found that she had miraculously extracted Gae Bolg from the stone in the real world.[1]

Despite its name and description, the spear has no real connections to the mythical weapon. According to the 11th-century manuscript known as the Book of Leinster, Gáe Bolg was given to a young Cú Chulainn by his combat instructor, the warrior-woman Scáthach, after training in either Alba or the Isle of Skye. Unlike an ordinary spear, Gáe Bolg could only be used by launching it from the foot, and upon piercing the target, instead of emitting lightning as depicted in-game, it would immediately spread barbs throughout the victim's entire circulatory system so that recovering the weapon required cutting away all the flesh surrounding the thorns.[2]

The spear is possibly being conflated with Gáe Assail, the spear of Lugh, Cú Chulainn's father and the slayer of Balor, which supposedly had lightning powers. 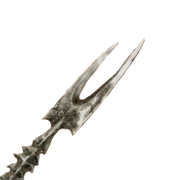