Freyja, also known as Freya, was an Isu who became a widely revered god in both Norse and Germanic mythology. A member of the Vanir group, she married the Æsir king Odin of Asgard in a political move to unite the Vanir and Æsir.[5] Freyja then became the stepmother to Baldr, the son of Odin and Frigg.[6]

The queen of a group of Scandinavian Isu called the Æsir, she was known in Norse mythology as the goddess associated with love, beauty, sex, death, war, gold, magic and fertility.[7]

Freyja was born alongside her twin brother Freyr as the daughter of the Isu Njörðr and his wife.[8]

Her marriage to the much older Æsir king Odin of Asgard was considered a largely political move. Over the time of their marriage they had many disputes and infidelities, but, despite all this, a fondness and mutual respect grew between the two in lieu of love. Although Freyja's status as the only Vanirian Queen of Asgard was not largely accepted by the populace, she became quite comfortable in her role as their queen and enjoyed adding more civilized touches to their otherwise war-centered lives.[5] At some point, the Isu Þrymr stole Thor's hammer Mjölnir, to which he disguised himself as Freyja to steal the Piece of Eden back.[9]

Freyja, at one point, was given an artifact by her husband. He then instructed her to hide another artifact in a vault, a device that pointed to the secret location where the armor stripped from a rogue valkyrie was stored. With his consentiment, Freyja eventually fulfilled the task.[10]

Sometime during the Isu Era, Freyja was one of the isu planning the defenses of Asgard during its attack by other Isu factions armies of soldiers. She deployed several Æsir to defend the four corners of the city but stayed behind with Týr and Thor to defend the main gate of the city. Odin not knowing of the incoming forces was made to end the Isu's disputes, while Thor wanted to bring Odin's forces right into the oppositions terf Freyja was more thoughtful. Both thinking that they could not afford such a loss of soldiers and that without Thor's Piece of Eden Mjölnir they would be overrun, she advised that they all stay behind face the army before they could reach the city. Though the Warlord Týr wanted to face the forces as they came to Valhalla Odin went with something similar to Freyja's option. The Asgardians would fight the army before they could cross the Bifröst. [citation needed]

Before the Æsir went to battle, Odin asked Freyja if there was an Isu in the army with a defining mark. Not having seen one, she asked what troubled him, but just then a horn blew and the army started attacking. The Isu ran into battle and after sealing the gateway the opposing side used they won the fight.[11]

After the fighting had ended the Isu found a strange man named The Builder who said he could help them shield Asgard from oncoming attacks, Odin helped the Builder build a prototype shield. He said he could build one that could shield all of Asgard for only Freyja's hand in marriage as his Queen.[12] Odin tried to Find Freyja but she was off trying to teach Thor about organizing armies, A battle they were both losing.

Odin made his way to Freyja as she was trying to teach Thor, seeing her husband perturbed she asked what was troubling him and Odin told them about the price they had to pay for the Shield. Gravely Angered and disturbed that Odin did not flat out refuse the builders request and by Tyr's persistence that they would even consider giving her away. Freyja had already been angry at Odin for trying to chase his own survival from the Great Catastrophe while saying he had all of Asgard's security in mind. Loki chimed in and said they could give the Builder an impossible task, to build the shield tower in but nine days. Persuaded by Loki Odin agreed and sent him off to tell the builder, angering Freyja further with her leaving the conversation with Thor.[13]

During the coming days the Tower grew more and more, worrying Freyja more every day. Nearing its completion she confronted Odin within Ivaldi's Forge and explained her worry. Expressing her thought that Odin did not care that she would be married off the old Isu gave a weak explanation angering her more and then giving her a weak apology that she said sufficed for now. Freyja started walking away but told Odin that after taking care of the builder he should point his spear at Loki, for he had dug them deeper into the pit they were in.[14]

Disguised as Freyja, Loki flanked by Thor and Tyr tried to trick the builder into finishing the last piece of the tower. But after discovering his bluff the real Freyja appeared, scolding the Aesir men for their stupidity. Especially her husband who had implied to have a plan this whole time. Seeing that he would not get to marry Freyja the builder stopped working on the tower and left the scene. Odin spoke to Freyja hoping they could speak on this matter later before leaving with Loki.

Freyja stayed at the tower awaiting Odin's return, he returned with resources needed to complete the shield. Freyja told Odin what to do and left him to do his work. The other Isu watched as the shields activated, locking The builder and Odin inside the tower, Freyja looked on as the two Isu engaged in combat. Odin won the duel and Freyja alongside the others ran in. She asked Odin if the builder was dead and he told her yes, asking if that worried the trickster Loki who brought the Builder into Asgard. Freyja Lashed out and Loki calling him dishonorable, Loki could only insult the other Isu. The Isu were angered but Odin let him go, Freyja asked what they would do now and Odin reassured her saying he would find their solution in far off lands, for he had heard of a method of preserving your life even through death.

Odin left control of Asgard into Freyja's hands for the meantime and travelled to seek answers.[15]

As the Great Catastrophe approached, Freyja and the other eight Norse Isu uploaded their DNA data into Yggdrasil to be later redistributed into the human gene pool.[16] Millennia later in the 9th century, Freyja was successfully reincarnated as Svala.[4] When Svala realized she was the reincarnation of Freyja and was nearing death, she traveled to Yggdrasil in Hordafylke and connected herself to the device, leaving her body in suspended animation and her mind in a simulated form of Valhalla.[3]

Freyja was a cunning strategist, planning alongside Tyr the battle tactics when Asgard was invaded. She even instructed Thor at one point on Battle strategy but to no avail. As Queen of Asgard she also held much power within Isu society, even being the sole Leader of the city while Odin was off in far off lands.

In Nordic culture, cats were considered sacred to Freyja, and akin to her in their character, being free spirits who tended to be aloof and haughty.[17]

Freyja had a totem named after her in the popular dice game Orlog, played during the 9th century. The piece "Freyja's Plenty" would allow a player to roll additional dice on their turn. An Anglo-Saxon man in Donecaestre, Eurviscire possessed the piece, which he gave to the Viking shieldmaiden Eivor Varinsdottir of the Raven Clan after being defeated.[18]

Freyja statue during the Sigrblot festival in Ravensthorpe 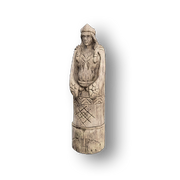 A toy of Freyja based off her Sigrblot statue