Francisco Randez is a French-Canadian fashion model, presenter, journalist and singer with a Hispanic ancestry. He was born and raised in the city of Montréal, Québec and began to model at the age of 20.[1]

He is notable for providing the facial likeness for Altaïr Ibn-La'Ahad, Ezio Auditore da Firenze and Desmond Miles throughout the Assassin's Creed series.[2]

As a teenager, Francisco worked both as a bartender and in his grandmother's corner store. Having begun his modeling career in 1998, Randez has been featured in the campaigns of well-known fashion designers and brands, including Jean-Paul Gaultier and Benetton.

Through his various modeling stints, Francisco has landed multiple jobs on television, radio and magazine interviews, for which he showed a growing enthusiasm. Randez began as a journalist for MontrealTV and worked on a television program called CoverGuy which aired in October 2008, as well as spending a 6 week-long trip in Panama to record a 13-episode travel adventure series named Aventuras Panama that premiered on September 2009 on Evasion.[2]

As a whole, Randez has shown interest in martial arts and combat sports, and had been boxing for nearly ten years, before switching to track and field; he has been running for several years now, specializing in 100 and 200 meter events.[1]

Although Francisco took on a career in music and modeling, he also has a passion for sports and how the body operates. With this in mind, he finished a degree in massage therapy at Guijeck Institute in Montréal, and has participated in naturopathic medicine studies, with his interest in health and wellbeing stemming from since his childhood.[1]

According to Francisco, the casting department of Ubisoft found him via his modeling agency, Folio. Ubisoft had been searching for "a face with Mediterranean features to return the character [Altaïr] to the time of the Crusades." At the first meeting, they set up a photo session, where they took images of Randez's face from every possible angle in order to render a 3D model. At the second meeting, they asked him to portray simple expressions, such as joy and anger.[2]

With each subsequent game, Randez had to return to the studio to have his face scanned again in order to update Desmond's player model. This caused slight differences in Desmond's facial appearance over the course of the games.[3] 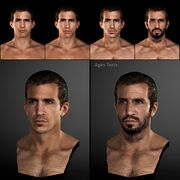 Retrieved from "https://assassinscreed.fandom.com/wiki/Francisco_Randez?oldid=664357"
Community content is available under CC-BY-SA unless otherwise noted.