Fort St-Mathieu was a fortified hilltop located in the American frontier, near the trail to New York City. During the French and Indian War, it was the home to a section of General Edward Braddock's military force and was run by the British until after the American Revolutionary War.

After the British took control, Fort St-Mathieu served as makeshift housing for Braddock's soldiers, as well as the Colonial militia. The fort was also a protective location to watch over the entrance to New York City from the frontier, and was located on a cliff-side to scout for both naval and ground-based attacks.[1] During the winter of 1754, Braddock had several of his men gather there to prepare for the Braddock Expedition; some of these soldiers included George Washington and John Fraser.[2]

As Braddock's adopted headquarters for the expedition, his plans were held in a command tent at the upper levels of the fort. Prior to the event, the Templar Haytham Kenway infiltrated the fort and disabled its cannons to weaken the defenses, as well as stole the plans in order to assassinate Braddock during the march.[2]

Several years later, Fort St-Mathieu was used to hold British soldiers attacking New York City. At some point, the Assassin Ratonhnhaké:ton killed the fort's officer and destroyed its gunpowder supplies, allowing for the Continental Army to take control and use it towards expanding their revolutionary efforts.[1]

In 2012, a simulated version of the fort was used by Abstergo Industries' entertainment branch, in order to influence the general public through the console stage of the Animus technology. It only became available after a system update had been installed. It was later reused for the 2013 edition.[1]

The fort bore more similarity to the state it was in when Ratonhnhaké:ton visited it as opposed to when Haytham did, though it was much larger, with most of the additional space being used for housing. A small tunnel had been excavated near to the cliffs, running underneath part of the fort and boasting multiple exits. Gallows could also be seen in the fort, presumably to sentence undesirables.[1]

With the implementation of new technology, simulated locations in the console stage were upgraded to have multiple aesthetic variations. Because of this, Fort St-Mathieu could be utilized during the day, the evening, or amidst light rain.[1]

Built alongside a cliff overlooking the Atlantic Ocean, the fort had two entrances, a main and side opening; a less accessible entrance was also available from the ocean if one were to climb the cliff-side. Overlooking these entrances were six separate watch towers, two for the water, three for the ground, and one for the fort exclusively. At the ocean-side, three cannons were set up in case of naval activity, accessible just below the watch towers.[1]

In the style of the time period, each wall was made from wood, which was also the primary raw material that the fort held, in the form of cut logs. Within the walls were two official stone buildings, used for the housing of the numerous troops that guarded the area. There was also a well, several sheds, weapons, a chest, a gunpowder reserve, and several resource deposits.[1]

Outside the walls, several barricades were set up to defend the more exploitable sections of the fort, and several tree stumps were scattered throughout the boundaries. Also guarding the fort from the ocean were at least three large ships, fitted to assist in both naval and land situations.[1]

Fort St-Mathieu during the day 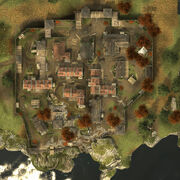 Retrieved from "https://assassinscreed.fandom.com/wiki/Fort_St-Mathieu?oldid=832152"
Community content is available under CC-BY-SA unless otherwise noted.