Forts are military complexes engineered for the defense of territory.

During the early 18th century, the pirate Edward Kenway assaulted and captured ten forts under the control of either the Royal Navy or Spanish Navy throughout the Caribbean,[1] whereas during the Seven Years' War, Templar Shay Cormac captured forts under control by the French Navy throughout the Northern Atlantic Ocean and River Valley.[2] During the American Revolutionary War, Edward's grandson, the Assassin Ratonhnhaké:ton, captured several forts under the control of the British Army, located in Boston, New York, and the Frontier.[3]

When Kenway or Cormac assaulted a fort, they first used their ship's cannons to destroy all of the outer walls and towers, rendering the fort vulnerable. They would then infiltrate the fort itself, kill its officers, destroying powder reserves, and break into the war room, where they would dispatch the commander. In the case of Edward taking over, the fort's flag would be lowered and replaced with a black one, and served as outposts for pirates in the nearby waters. When taken over by Shay, the flag would be replaced by a British one. [1][2]

In Colonial America, after destroying a fort's gunpowder reserves and killing its captain, Ratonhnhaké:ton lowered the British flag in exchange for a Colonial one. By doing so, control of the fort shifted from British control to that of the Continental Army.[3]

By capturing the forts in the Caribbean, Edward was able to exert his piratical influence over a much greater area, as the forts would attack any passing warships. In addition, capturing a fort would clear away a part of the map, detailing previously undiscovered locations.[1] In the Thirteen Colonies, capturing the forts helped make the trade routes much safer, as previously there had been a higher risk of losing trade vessels, such as convoys, to bandits.[3]

The Knights Hospitalier's Fortress in Acre

The Jackdaw docked at the subdued Punta Guarico

The Morrigan attacking a fort 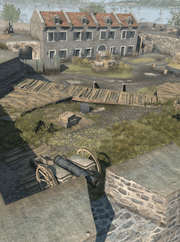 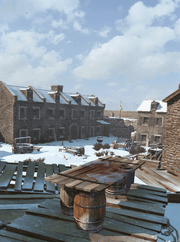 Aerial view of the Cult of Kosmos' fort at Lemnos.

The sole entrance into Olynthos Fort.