The Formidable was a trireme captained by the Order of the Storm member Nestor during the Peloponnesian War.

Throughout its years of operation, the ship was said to have been undefeated, until its eventual destruction by the Adrestia commanded by the Spartan misthios Kassandra in around 422 BCE. The ship's sail and figure head were later recovered by Kassandra for her own usage.[1]

The ship in charge of which Nestor is during the Assassin's Creed: Odyssey's DLC Legacy of the First Blade: Shadow Heritage is not unique among other Persian elite triremes. In fact, the name of the ship is randomly generated. 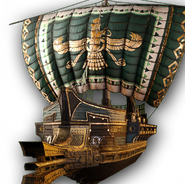 The design of the Formidable
Add a photo to this gallery

Retrieved from "https://assassinscreed.fandom.com/wiki/Formidable_(trireme)?oldid=878788"
Community content is available under CC-BY-SA unless otherwise noted.