Forlì – A Crimson Sunset is a premium downloadable content, single-player Campaign Pack and the first major update for Assassin's Creed: Identity. The update was released on 18th May 2016 on iOS, and the Android version of the game also released on the same day includes the DLC as well.[1][2] The Forlì Campaign is available for purchase after finishing Italy - A Murder of Crows memory sequence.

The story setting after the Crows' leader, Sirus Favero's death in Roma. A few months later, Niccolò Machiavelli received a letter from Forlì where the place happened a series of ruthless murders.

Hidden Treasure Chests can be found on maps. New Legendary Items in the Heroic shop, including 'The Sword of Altaïr'. Improved Daily challenges. Great new novice packs and outfits in the shop, including the “Ghost Robe” and “Pulverizer” outfits. Weibo & Uplay support to play the game across multiple devices.

In this memory sequence, the events occurs in the immediate aftermath of the fall of the Crows in Rome, which itself takes place many years after the Siege of Monteriggioni in 1500. However, these memories' journal entry describes its events as also occurring shortly after Ezio and Mario Auditore present the Apple of Eden to Machiavelli with the idea to send it to Forlì, which canonically occurred in 1488. Reinforcing this inconsistency is that the Battle of Forlì happens soon after this in the memory sequence. The date of the memories has no longer show in the game. 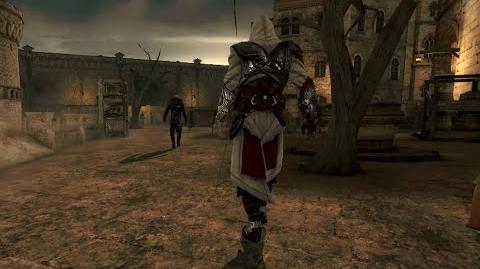 Retrieved from "https://assassinscreed.fandom.com/wiki/Forl%C3%AC_%E2%80%93_A_Crimson_Sunset?oldid=876572"
Community content is available under CC-BY-SA unless otherwise noted.