Assassin's Creed Wiki
Register
Don't have an account?
Sign In
Advertisement
in: Articles that need updating, Cities in Italy, Forlì,
and 3 more

"Take it to Forlì. The citadel's walls are protected by cannons and our ally controls it."
―Mario Auditore about Forlì, 1488.[src]-[m]

Forlì is a city located in the region of Romagna and the capital of the province of Forlì-Cesena. During the Renaissance, it was the site of its eponymous battle, the Battle of Forlì.

Forlì was founded by Paleolithic cavemen in 798,000 BCE who were interested in flint manufacturing, paving the way for its reputation as an industrial center. Forlì's name is derived from the Romans (Forum Livii), who built the city in 188 BCE, along the Via Aemilia, one of several roads they laid after pacifying the Gauls in the region.[1]

After the Roman rule, it went from Lombard hands into Church control. It became an independent republic in 889, infuriating the Vatican. The Vatican then spent the next 400 years trying to regain control over the city.[1]

Along with Rome's constant machinations, Forlì faced a steady stream of Goth, Byzantine, Lombard, and Frank marauders for the next few centuries. In addition, it faced annual flooding, which was finally brought under control by diverting nearby rivers away from the city center in 1050.[1]

Forlì became a military dictatorship at the end of the 13th century and power was then was passed to the Ordelaffi family. In 1480, with the Ordelaffi fighting amongst themselves over the chain of succession, Pope Sixtus IV stepped in and gave the city to his nephew, Girolamo Riario.[1]

In 1481, the Florentine Assassin, Ezio Auditore, visited Forlì en route to Venice along with his friend Leonardo da Vinci. During the visit, Ezio rescued the countess, Caterina Sforza, from a small island where she was stranded.[2]

In 1488, Caterina hired the Orsi brothers, Checco and Ludovico, to assassinate her husband, Girolamo Riario. At the time, Girolamo had joined the Templars and had been developing a map of the locations of the fabled Codex pages.[2]

Later, in 1488, Ezio returned to Forlì along with Niccolò Machiavelli, intending to make the Rocca di Ravaldino, a castle inside the city, a haven for the Apple of Eden obtained from Rodrigo Borgia. However, before the Apple could be secured, the Orsi brothers, working on behalf of the Borgia, seized not only Forlì, but also Caterina's two young children, Bianca and Ottaviano. The Orsi brothers held them as hostages, intending to trade the children for the Apple.[2]

During the battle, Ezio was able to save the Sforza children and slay Ludovico Orsi easily, but was badly wounded while retrieving the Apple, after being stabbed by a dagger wielded by Checco Orsi. Despite his injuries, Ezio was able to kill Checco as well.[2]

Ezio, weakened by his injury, fainted. In the confusion that ensued, a black robed monk was able to steal the Apple of Eden still clutched in Ezio's hand.[2]

Following the battle, Caterina nursed Ezio back to health at the Palazzo Communale. Ezio learned from Darby O'Callahan and the monks of the Abbey of San Mercuriale that the thief was a Dominican friar by the name of Girolamo Savonarola, whom Ezio tracked down and killed in Florence, thus once again obtaining the Apple.[2]

After the events of the battle, Forlì fell solely in the hands of Caterina, who fought to prevent the Vatican from re-taking control.[2] Ultimately, however, Cesare Borgia conquered Forli after he had captured Caterina following the siege of Monteriggioni. The Countess perished in Florence after her escape and Forlì passed into Church hands despite her son's attempts to reclaim it from Pope Julius II.[3]

In 2012, Forlì was used as a simulated training location by Abstergo Industries during the first stage of their Animi Training Program.[2]

The simulation depicted the Abbazia di San Mercuriale and the surrounding area, which contained mostly housing, some of it in poor state, as well as plenty of market stalls. Forlì's streets were mostly spacious and long, with little alleyways connecting the more open areas, of which one was dedicated to the keeping of horses, with several stables present, as well as haystacks and watering troughs. Due to the low tide, the city drains were empty of water, turning one of the city's wells into a possible escape route.[2]

Forlì was not programmed to have aesthetic variations. As a result, it could only be used during the day.[2]

Forlì being invaded by enemy troops

A simulation of Forlì 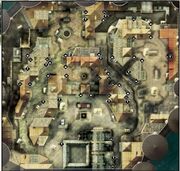 An aerial view of the Forlì map used in the Animi Training Program, with chase breakers marked

The Prowler shooting the Barber from afar with the Hidden Gun

The Captain, having thrown down a smoke bomb, attempts to escape the Harlequin