"Cutting through groups of people, he moves towards his target as silent and deadly as a snake. Quickly, he rushes to his victim, brandishes his two knives and plants them into flesh, as if they were fangs. The target falls, the crowd screams, but the Footpad has already vanished."
―Description of the Footpad.

The Footpad (harvested from: Lanz) was an unlockable Animi Avatar, used by Abstergo Industries to train the recruits in the first stage of their Animi Training Program. He became available after a recruit had reached Level 35, and he used a pair of daggers named shivs as his primary weapon.

The Footpad had several unique moves:

The Footpad approaches his target and inflicts a rapid sequence of punches to the middle of their torso, followed by an uppercut to their jaw, which sends their head backwards. Once his victim's neck is exposed, he viciously brings down one of his shivs to their lower neck, piercing their heart for the final blow.

The Footpad approaches his target from behind and grabs them by their left shoulder, before brutally stabbing them in the side of the abdomen twice. With the second stab forcing his victim to the floor as they go limp, the Footpad replaces his shiv in its holster.

The Footpad runs directly at his target and raises one of his shivs for a high attack, but they resist by grabbing his arms and pushes him back. Then, he ducks down to waist level for another attempt and stabs his victim in their lower torso, striking one of their internal organs.

The Footpad runs over to his target from behind and slashes them horizontally across their spine, before stabbing them in the left of the abdomen and hastily removing his shiv. With this, his victim collapses to the ground, paralyzed and bleeding out, while he stores away his weapon.

The Footpad slashes his seated target across the face with his shiv, and before they collapse, he grabs their shoulder and brutally plants his weapon into their throat. After stabbing them, he pulls his shiv free, which also yanks his victim's body to the floor.

The Footpad jumps from a rooftop and pulls out one of his shivs in mid-air, all while he falls towards his target. Using the downward momentum, he lands on them and embeds his shiv into their neck, before pulling his weapon free and storing it at his waist, while his victim lies dead on the floor.

The Footpad could be customized in several ways: 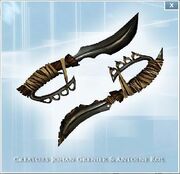 The Footpad's shivs, with added knuckle-dusters

The Footpad assassinating the Smuggler