Assassin's Creed Wiki
Register
Don't have an account?
Sign In
Advertisement
in: Cults, Organizations, Cult of Kosmos allies,
and 2 more

The Followers of Ares was a minor Greek terrorist cult which worshipped Ares, the Greek god of war. They were notable for their rampant bloodlust, preying on hapless travelers throughout Greece to be sacrificed to their god. They were hostile to anyone who stumbled upon them, but would often visit towns to preach their religion.

By the onset of the Peloponnesian War, the Followers had been subsumed into the Cult of Kosmos; their leader, Harpalos, was a member of the Worshippers of the Bloodline. This brought them into direct conflict with the Spartan misthios Kassandra, who eventually assassinated Harpalos and crippled their cult.

The Follower's banner featured a stylized, helmeted head, presumably that of Ares. Described as a "sadistic cult of fanatics" who sought "violence and death", they would attack anyone who approached them.[1] The Followers were also accused of cannibalism,[2] a charge that was at least partially based on truth, as witnessed by the Spartan misthios Kassandra in Messara.[3] They were said to be outcasts of society who preferred using poison instead of brute strength.[4]

According to Hippokrates, they believed that the cremation of corpses during the Plague of Athens was sacrilegious.[5] Despite his claim, bodies were burned in multiple campsites of the Followers, most notably in their camp in Pandora's Cove in Malis.[1]

Individual Followers were easily identifiable, as they wore dark clothes and black hoods with white painted on their bodies and faces, often in imitation of skull and bones. At their ceremonies, all would stand in reverence for their god, and unlike other Greek religions, would sacrifice not only the land's fauna but people as well.[1]

Before the Peloponnesian War, Harpalos, a member of the Worshippers of the Bloodline branch of the Cult of Kosmos, approached the Followers of Ares and was welcomed by them. Harpalos' sermons appealed to the Followers, and he rose quickly to lead them, gaining them the blessing of a fellow Worshipper of the Bloodline, and volunteering them as an army for the Cult.[6]

Eventually Harpalos was hunted down by the Spartan misthios Kassandra over the course of her quest to destroy the Cult.[7] She also repeatedly encountered scattered groups of the Followers throughout Greece during her travels.[1] One of these was a group of female Followers of Ares, who had settled in a tomb on the island of Kos. Their singing had given rise to rumours about sirens haunting the place, and drew many victims to them, including Eurylochos.[8]

By the time of the Peloponnesian War, the Followers were a common though often unwelcome sight, whether they were proselytizing, prophesying, or simply passing through a town. Because of their terrorizing, their reputation had grown large enough to not only frighten the common folk, who believed the cult to be poisoners with no qualms over stealing a dog to sacrifice or fooling people out of drachmae,[9] but also some mercenaries, who feared that the Followers would curse them in their rituals.[10]

During the plague of Athens in 429 BCE, the Followers of Ares openly walked the streets of the polis, harassing the citizens, including Hippokrates and Kassandra. A few attempted to interfere with Kassandra's burning of the plague-infected bodies although the misthios was able to eliminate them.[5]

The Followers of Ares had three distinct ranks: Priests who wielded swords, the female Elders bearing spears, and the brutish Fanatics armed with axes.[1]

Followers of Ares conducting a ritual

A priest of Ares praying at an altar

A makeshift altar of the Followers of Ares

Female Followers of Ares aboard the Adrestia

Male Followers of Ares aboard the Adrestia 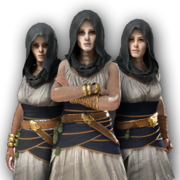 Icon of the female crew skin 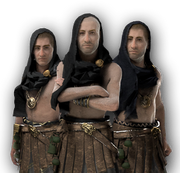 Icon of the male crew skin