"Have you ever watched a bird in flight? It's not about being lighter than air, it's about grace and balance. You must use your body's own weight to control your elevation and direction."
―Leonardo da Vinci describing the mechanics of the Flying Machine.[src]-[m]

The Flying Machine was a glider-like vehicle designed and built by the Italian polymath Leonardo da Vinci.[1] It was first tested by the Assassin Ezio Auditiore in Venice in 1485.[2]

Leonardo would go on to improve its design[3] by adding an incendiary cannon onto its back, which could both be used to attack and start fires to keep the machine aloft.[4] This Bomber was manufactured in bulk by the Borgia forces in Valnerina.[5]

The first time Ezio caught a glimpse of the Flying Machine was when he went to help Leonardo fix the wheel of his carriage in the Apennine Mountains. After Ezio asked him what it was, Leonardo replied that it was just an idea, one that might be able to make a man fly. Ezio simply dismissed the thought with a laugh, and the two climbed into the wagon and set off.[1]

Some time after arriving in Venice, Ezio and Antonio de Magianis attempted to find a way into the Palazzo Ducale, so as to save Doge Giovanni Mocenigo from assassination by the Templar Carlo Grimaldi. Upon stating with frustration that only birds could enter the heavily-guarded palazzo, Ezio remembered Leonardo's invention, and promptly left for his friend's workshop.[6]

Initially, Leonardo thought that he would not be able to find someone crazy enough to test his machine, as it required them to jump off a tower; however, Ezio readily volunteered.[2]

Their first attempt failed, as the Flying Machine was barely able to stay in flight for a few seconds, but Leonardo was still amazed that Ezio could even fly at all. After checking the design to see if the duration of the flight could be extended, Leonardo gave up and cursed the machine, throwing the plans for it into his fireplace.[2]

However, this inspired Leonardo, as he saw the paper levitating above the fire, buoyed by the hot air. With this, he suspected that the Flying Machine could work in the same manner. As a result, Antonio de Magianis instructed his thieves to set up fires across the city,[2] allowing Ezio to fly over them and successfully make his way to the palazzo.[7]

Unfortunately, during the landing, the machine's wing caught fire from an archer's flaming arrow, and after a sudden drop onto the roof, the glider crashed into the harbor by the palazzo.[7]

"The first designs were defective. Everyone who piloted one died, several even exploded. But we know this one works."
―A guard commenting on the Bomber.[src]-[m]

After being forced into the service of the Borgia as an engineer, Leonardo significantly improved the design of the Flying Machine, alongside three other war machines.[3] The new Flying Machine, called the Bomber, could then be used more aggressively, rather than just for travel. The fire cannon it bore also allowed it to travel over greater distances, without pre-set fires on the ground.[4]

In order to weaken the Borgia forces, Ezio traveled to Valnerina to burn the plans for the Bomber, and destroy the working versions of it.[5] After stealing one of the few working prototypes, Ezio proceeded to fly over and destroy every Borgia workshop, where the Bomber and various other weapons were being manufactured for their wars across Europe.[4]

Ezio also used the machine to attack any wagons that attempted to bring salvaged materials from the workshops to the safety of the fortress, including a single mounted messenger who attempted to alert Cesare Borgia of the attack. Finally, after ensuring that the design could not be used by the Borgia, Ezio crashed the machine he had been using into a wooden guard tower, destroying it completely.[4]

In 1778, when the American woodworker Lance O'Donnell received plans from France for a folding chair,[8] he was also given plans for Leonardo's Flying Machine. In his excitement, Lance built the device and Ratonhnhaké:ton chose to test it. However, they were unaware of the heat required to provide elevation for the machine, and it promptly crashed into the bay of Davenport Homestead during the flight attempt.[9]

In 2014, the Templar front company Abstergo Entertainment created a digital model of the Flying Machine to use in their marketing campaign for the Helix Navigator.[10]

Historically, it was believed that Tommaso Masini da Peretola, a pupil of Leonardo's, flew his master's machine for 1 kilometer in the countryside outside Florence in 1505, but had a rough landing and ended up with a broken leg.[11]

The Bomber machine was never implemented as a plan by Leonardo, since his flying machine was unsuccessful due to the test flight his student had done.

The flying machine could be seen in the background of both of Leonardo's workshops.

After downloading the Battle of Forlì downloadable content for Assassin's Creed II, a "Special Memory" was added to the map of Forlì, where Ezio could use the Flying Machine at any time. This was likely added as another opportunity to gain the "Fly Swatter" achievement.

Successfully using and destroying the Bomber granted the "Boom!" achievement.

A small model of the Flying Machine could be purchased as an avatar prop for Xbox 360 avatars.

Concept art of Ezio using the Flying Machine over Venice 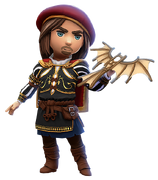