Assassin's Creed Wiki
Register
Don't have an account?
Sign In
in: Articles that are known by a nickname, Unidentified individuals, 1927 deaths,
and 3 more
English

"Flowery Flag" (unknown – 12 April 1927) was an American killer from Baltimore who worked in China as a henchman of Du Yuesheng, the crimeboss of the Green Gang in Shanghai.

During the Shanghai massacre of 1927, Yuesheng tracked down Ruan Lingyu after she stole a box from the Templars that was destined for Chiang Kai-shek. The crimelord eventually traced her back to a Temple where she was hiding with Darius Gift, and sent Flowery Flag after them.[1]

There, announcing his presence with a rendition of "My Country, 'Tis of Thee", the killer disarmed Ruan with a knife thrown from a device attached to his forearm and easily subdued the young Gift, but was prevented from finishing the job by the arrival of the Black Cross Albert Bolden. The two men engaged in hand to hand combat until Flowery Flag pulled out a gun and shot his foe, hitting him in the shoulder.[2]

However, as Flowery Flag moved to kill the Black Cross, Ruan stabbed him in the back. Using the diversion, the Templar quickly wrapped his Templar Cross chain around Flowery Flag's neck before pushing him through a window. Flowery Flag was hanged with the chain.[2]

Flowery Flag was highly skilled in combat. He easily incapacitated Darius with a kick to the head and was able to fight a Black Cross on equal terms at the least. In terms of equipment, he possessed knives, which he kept inside a device attached to his forearm hidden up his sleeve, a gun, and a large knife. 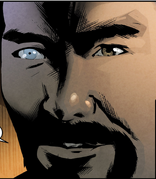 A close-up of Flag's face