Assassin's Creed Wiki
Register
Don't have an account?
Sign In
Advertisement
in: Florence, Tuscany, Cities in Ancient Rome,
and 6 more

Florence (Italian: Firenze) is a major city located in central Italy, and the capital of the region of Tuscany. During the late 15th century, the city was ruled by the powerful Medici family, and comprised four districts: Santa Maria Novella, San Giovanni, San Marco, and Oltrarno.

For a brief time, however, the city fell into a dark age of sorts with the Bonfire of the Vanities, when, under the command of Girolamo Savonarola, thousands of objects such as cosmetics, art, and books deemed occasions of sin were destroyed.

Florence was founded by Julius Caesar during the Republic era, in the year 59 BCE, although it would be some 1,400 years before it developed into one of Italy's most important cities. After the sacking of Rome in the 5th century, the Ostrogoths took over. Under their rule, the city was constantly under attack from the Byzantines, who sent the population level below 1,000. However, the Lombards came to power in the 6th century, ending the Byzantine assaults.[1]

Early in the city's history, it, like many other cities, attempted to gain control of the surrounding lands and towns. Two such areas were Monteriggioni to the north and Pisa to the west. Although the former maintained a shaky alliance with Florence afterwards, it would be years before Pisa would follow suit. Florentine heralds often spread the news of Pisa's demonstrations of contempt to Florence.[2]

Florence grew to a population of 80,000 in the 14th century, of which 25,000 were working in the wool industry. In 1378, a major revolt of the lower class led to the wool combers rising up and seizing the government of the city. Their progressive, radical democracy lasted for less than two months before the upper classes seized control once more, but the revolt so terrified the rich it was still discussed in hushed tones a century later.[1]

The Albizzi family became the de facto rulers after the revolt. Worried about the rise of the Medici family, who were rich bankers rapidly gaining influence in Florence, Maso and Rinaldo Albizzi imprisoned Cosimo de' Medici and exiled him in 1433.[1]

However, Cosimo gained influence behind the scenes, and rose to power in 1434, exiling the entire Albizzi family except for Luca, who had been loyal to Cosimo. Luca Albizzi joined the Signoria, the ruling body of Florence, as Gonfaloniere, succeeding Cosimo's old friend Ilario Auditore in 1442.[1]

After Cosimo de' Medici's revolt, the Medici family governed the city in what would come to be known as its Golden Age; a true Renaissance. The family had a focus on the arts and sciences, as well as an intricate banking system. At the time, the city was also home to some of Italy's most notable figures; including Leonardo da Vinci, Sandro Botticelli, Michelangelo, and Niccolò Machiavelli, some of whom received funding from the Medici for their works.[1]

At some point after the year 1324, the Assassin Domenico and his son Renato came to live in Florence, and adopted the name of "Auditore". Under this guise of nobility, they quickly assimilated themselves into the city's upper class, and became a well-respected and known family in Florence.[3]

The city flourished during the reign of Lorenzo de' Medici. Throughout his rule, great artists, philosophers, and others contributed to the city's development. Various architectural marvels blessed the streets of Florence, such as the Santa Maria Novella, the Piazza della Signoria, the Duomo, and the Ponte Vecchio.[2]

Though the Assassin-affiliated Auditore family abandoned Florence after the Pazzi conspiracy in 1476, one of its members, Ezio Auditore da Firenze, continued to frequent the city.[2] During the early 16th century, he would also send his apprentices to Florence to complete several contracts for the Assassin Order; such as delivering reports, stealing weapons, or delivering forged pardons.[4]

Eventually, the Medici's extravagant lifestyle drew the ire of the middle and lower classes and their popularity waned. After the death of Lorenzo de' Medici in 1492, he was succeeded by his son, Piero. Piero ruled as Signore of Florence until 1494, when he was exiled from the city by Girolamo Savonarola.[5]

In 1493, Bonacolto Contarini, a Templar and member of the famed Contarini noble family from Venice, travelled to Florence to attempt a resurgence of the Templar influence in city. Using his family's riches and influence, he strong armed merchants and officials who sided with the Templars while imprisoning those who resisted, intending to sell them off to foreign slavers. In response, Ezio returned to Florence with assistance from Corvo Antonelli, Perina di Bastian and the Spanish Brotherhood to stop Bonacolto's operations, destroying the Templar presence once again.[6]

Between 1497 and 1498, the monk instigated the Bonfire of the Vanities, where paintings, books, and other works of art were publicly burned throughout Florence. Despite civil unrest, Savonarola held control over the people with both the Apple of Eden, and the terror of his nine lieutenants.[7]

Eventually, in May of 1498, the Assassin Order intervened in his rule. Ezio Auditore tracked down and killed Savonarola's nine lieutenants, while Niccolò Machiavelli, La Volpe, and Paola rallied the citizens. The Florentine people eventually rioted before Savonarola's residence in the Palazzo Pitti, dragging him to the Piazza della Signoria to be burned at the stake.[7]

In 2012, Florence was used as a simulated training location by Abstergo Industries during the first[4] and second stage of their Animi Training Program, being introduced to the latter via a system update.[8]

The simulation depicted the Mercato Vecchio, a well-known marketplace in Florence's Santa Maria Novella district, and the surrounding area, which featured lots of narrow alleys, allowing for a quick escape when necessary. Visitors could take a break from the vendors' noisy shouting by reclining on the benches in one of the area's relaxing courtyards. Construction was in progress on some of the rooftops, with hanging platforms having been set up, which allowed people to move easily from the encircling buildings to the Mercato Vecchio itself.[4]

Florence, like most of the simulated locations in the first and second stage, had two aesthetic variations. As such, it could be utilized during the day or the night.[4]

An Assassin cell led by Adriano Maestranzi was located in Florence by 2012. However, the Templar Juhani Otso Berg managed to follow the Assassin Harlan Cunningham back to the cell. Berg and Sigma Team attacked the Assassin hideout, although Maestranzi blew it up, killing everyone except Cunningham and Berg.[9] 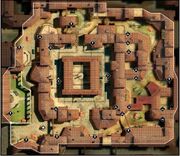 A map of Florence in the Animi Training Program

Florence from a bird's eye view

The rooftops of Florence

Ezio killing a guard on a Florentine rooftop

Ezio in Florence at night