Flavia Auditore (born 1513) was the daughter of Ezio Auditore da Firenze, Mentor of the Italian Assassins, and of his wife Sofia Sartor. Born after her father's travels in Constantinople during the early 16th century, Flavia had one brother, named Marcello. She is also an ancestor of Desmond Miles.[2]

In 1524, Flavia befriended the Chinese Assassin Shao Jun, who came to their villa seeking Ezio's advice, concerning the decline of the Assassin Order in China. Together, Flavia and Shao Jun walked around the exterior of her home, but they were interrupted when Ezio grabbed Shao Jun, believing her to be a threat to his daughter.[3]

However, Flavia informed her father that Jun was merely a friend, and that she posed no danger. Ezio then recognized her as an Assassin by her necklace, which displayed the Assassin insignia, before he released his hold on Jun. Following this, he told Flavia to go inside, much to her dismay.[3]

Some time later, Ezio discovered from Shao Jun that she had been followed by Chinese Templars, and due to the threat that it posed for his family, Ezio sent Flavia, Sofia, and Marcello away to stay with fellow Italian Assassin, Niccolò Machiavelli, for a night. As they departed in a small wooden carriage at dusk, both Flavia and Sofia appeared to be saddened at the thought of being away from Ezio for while, but complied nonetheless.[3]

Later that year, Flavia went to a market in Florence with her parents. As she and her mother went to buy groceries at a nearby stall, Flavia excitedly led the way. Following this, the two left Ezio on a bench close to the stall where he could rest and observe the market square.[3]

During this time, Flavia and her mother quickly bought some groceries, and then began browsing masks at another stall nearby. While looking at a mask, Flavia turned back to look at her father, and saw him lying motionless on the bench. Realizing there was something wrong, she notified her mother and the two dropped their items to hurry over to Ezio, finding him lifeless.[3]

Flavia appeared to be a young, carefree child, who enjoyed the company of her parents. She was also sad to have to leave her father and stay with Machiavelli, and also appeared confused and dejected once her father told her to go inside after confronting Shao Jun. However, she seemed to love and appreciate her family, possessing a fun, cheeky relationship with her father, but presumably less contact with her mother, as she was hardly seen with her.[3]

As a child, Flavia wore a light, rose colored dress with a yellow design on it, which appeared to be a fleur-de-lis, surrounded by thick intersecting lines in a repeated pattern. These lines formed spaces which were filled with opposite facing fleur-de-lis, and under the dress, Flavia wore a white long-sleeved button-up shirt with a small collar. She also worn a crown of flowers on her head, situated just above her forehead.[3]

Shao Jun with Flavia, and Ezio running toward them

Flavia and Sofia about to depart for Machiavelli's residence

Flavia witnessing her father motionless on the bench 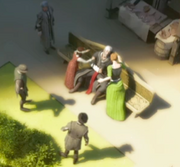 Retrieved from "https://assassinscreed.fandom.com/wiki/Flavia_Auditore?oldid=802304"
Community content is available under CC-BY-SA unless otherwise noted.