1191
Fighting Fair was an altered representation of a fragmented genetic memory.

One of the knights we killed was carrying a note that said a friend of Montferrat's, a famous knight, would be arriving in the city to serve as Montferrat's bodyguard.

If even half of the stories about this knight are true, he could prove a deadly obstacle to Altaïr. We must catch him unaware before he reaches his charge, and destroy him.

The note mentions that he will be arriving by ship, so we will set our ambush at the city docks.

The Levantine Assassins made their way through the port, eliminating the Crusaders and Templars stationed there, and eventually reached Isembart on the dock itself.

Isembart engaged the Levantine Assassins in combat, but was fatally wounded.

Isembart collapsed dead on the dock.

The Levantine Assassins rushed off to prevent Altaïr from walking into a trap.

The Levantine Assassins eliminated the knight Isembart before he could rendezvous with William, but before he died, he revealed that William knew Altaïr was coming and had prepared an ambush. 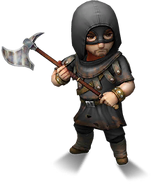