Federico Auditore da Firenze (1456 – 1476) was a Florentine noble and a member of the Italian Brotherhood of Assassins, trained into the Brotherhood by his father.

He was also the eldest son of Giovanni and Maria Auditore da Firenze, as well as the elder brother of Ezio, Claudia, and Petruccio. Following this, Federico was the nephew of Mario Auditore.

Federico lived a comfortable life with his family in the Palazzo Auditore of Florence,[1] and was originally schooled to become a banker in a Medici bank. However, he was a notorious slacker, and once hid a sack of the bank's money on the roof of the building as a joke. Being an Auditore, he was merely removed from the payroll and saved from harsher consequences.[2]

As the eldest child of the Auditore, Federico took defending his family quite seriously. When Antonio Maffei arrived up at their palazzo in an attempt to capture Giovanni for the first time, Giovanni, having not yet recovered from his recent skirmish, elected to escape. Federico went to Giovanni who instructed his son to buy him time, telling him to defend the family at all costs.[1]

Federico succeeded in delaying the guards long enough for Giovanni to leave, telling them that his father was not home. After the men barged into the house and discovered it empty of all but Federico and his mother, Federico kicked them out, and told them to never doubt an Auditore again.[1]

"I've come to see if baby brother has finally learned how to fight."
―Federico arriving at the brawl on the Ponte Vecchio.[src]-[m]

In 1476, as Ezio was fighting against Vieri de' Pazzi, a member of a rival noble family, Federico showed up to help his brother. He proved to be an excellent fighter, and after they won the brawl, Federico instructed Ezio to loot money from the defeated enemies to treat his injuries.[3]

After Ezio did so, Federico then directed him to a doctor to have his wounds seen to.[4] Once Ezio had been serviced by the doctor, Federico challenged his brother to a race, and the two climbed to the top of a nearby church to take in the sights of Florence.[5]

The following morning, Federico lounged about at home while Ezio ran errands for their family, whereby Ezio teased him for his inactivity. However, later that day, Federico was beaten and captured by the city guards, along with his father and younger brother Petruccio.[6]

Federico was held prisoner overnight, while Ezio frantically attempted to secure the release of his family.[7] The next morning, Federico was hanged alongside his father and brother, the victims of a Templar conspiracy orchestrated by the Pazzi.[8] Later at night, Ezio, with the assistance of Cristina Vespucci, carried the bodies of his family including Federico onto a nearby boat so he could give them a proper burial.[9]

Years later, Rodrigo Borgia informed Ezio that there had been no need to kill Federico or Petruccio, but that he had only executed them to establish a point.[2]

Federico: "You must help him! That pretty face is his only asset!"
Ezio: "Fottiti! (Go fuck yourself!)"
—Federico to a doctor, teasing Ezio about his injuries.[src]-[m]

Federico was a witty, sharp, and jovial individual who liked to tease Ezio, but refused to tolerate someone else harming him. He started his training as an Assassin with his father before Ezio, and passed on much of his learnings of combat and freerunning to his younger brother.[2]

Ezio also likely inherited his womanizing habits from Federico, who once encouraged his brother to talk to a passing attractive girl, Cristina Vespucci. He offered his younger brother advice on how to charm her, and after Ezio had only managed to embarrass himself, Federico laughed and reassured him that, since Ezio had gotten a smile out of her, she would remember him.[10]

Fecerico Auditore is a character in Assassin's Creed II and the film Assassin's Creed: Lineage. He is voiced in-game by the actor Elias Toufexis, and portrayed in film by Jesse Rath. 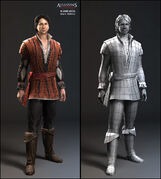 Federico being threatened by Antonio and his men

Federico's body being carried by Ezio 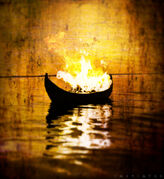 Federico and his relatives being cremated