Fabio Orsini (c. 1476 – 1504) was an Italian condottiero and a member of the Papal Guard. He was also the cousin of Bartolomeo d'Alviano.

Fabio Orsini was born in either 1476 or 1477, as the son of Paolo Orsini. He was trained in the art of combat at an early age, and participated in a battle at Montepulciano, fighting for the Sienese against Florence.[1]

Affiliations with the Borgia

Around three years after the battle at Montepulciano, Fabio joined his cousin Bartolomeo d'Alviano in a fight against the Savelli family.[1]

Following the battle, he married Jeronima Borgia, cousin of the Papal Commander Cesare Borgia. He supported his in-laws for some time, until he freed an imprisoned friend from the Tor di Nona.[1]

He was forced to continue serving the Borgia family however, as Cesare managed to cripple the power of the Orsini.[1]

In 1500, Fabio lent an old storehouse on Rome's Tiber Island to the Assassin Order, hoping that it would aid them in their war against the Borgia. He was also aware of the fact that his cousin Bartolomeo was amongst the Order's numbers, as he had heard many stories about Bartolomeo's fellow Assassin, Ezio Auditore da Firenze.[2]

Later, Fabio attacked Micheletto Corella's army after Cesare had Fabio's father Paolo killed. He was unable to defeat the skilled Micheletto, however, and lost his status as the leader of the army. He then became an outlaw, raiding the countryside, and a warrant for his arrest was placed on him by Rodrigo Borgia, Pope Alexander VI.[1]

After the death of Rodrigo, and his son Cesare's fall from power, Fabio entered the newly elected Pope Julius II's service. He led the Papal armies for him, in order to arrest Cesare for murder, betrayal and incest.[3]

In late 1503, he fought on the Spanish side at the battle of Garigliano against the French (counting among their ranks Piero de' Medici, among others) alongside Bartolomeo and Prospero Colonna. However, he died in from a head wound he received during the fight.[1] 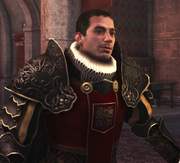 A close-up of Fabio