The Assassin Ezio Auditore da Firenze wore several sets of robes throughout his life, of which three were fully customizable (adding armor, dyeing the robes, and equipping different capes) along with more special sets of robes that each came with near-unbreakable armor, though they could not be customized.

Ezio inherited the Assassin robes of his father, Giovanni Auditore da Firenze, following his arrest. These robes were symbolic for the Assassin Order, with its beaked hood and the faded white cloth.[1]

The standard robes were worn over Ezio's normal clothing. The upper body featured a hood with the center shaped to resemble an eagle's beak, which was connected to the robes, with the torso bearing an open collar.[1]

The lower part of the robes were doubly layered, with the back of the robes trailing down to be longer than the front. Around the waist was a long red sash with pouches attached to a belt, holding smoke bombs, bullets, poison and medicine vials. The belt also held together an ornate Assassin insignia, with scabbards holding throwing knives flanking it. The robes featured a leather spaulder where a cape was attached, draped over and around Ezio's left arm and shoulder.[1]

Ezio had a choice to wear one of four capes with the robes; the standard cape, the Medici cape, the Venetian cape and the Auditore cape, though the standard cape was the only one that Ezio was able to dye, while the others granted him certain privileges or notoriety.[1]

After the siege of Monteriggioni, Ezio was given a new set of robes, provided by Niccolò Machiavelli, which looked strikingly similar to both his father's robes, and the robes of Altaïr Ibn-La'Ahad.[2]

Ezio's Roman robes showed similarities between Giovanni and Altaïr's robes in its design, as they had a long, layered lower section, although they maintained the open collared torso similar to Giovanni's robes, and included a closed collar beneath. The hood shape from the previous robes had been kept as well, along with the wide, red sash displaying the Assassin's insignia and the function of carrying Ezio's throwing knives. The robes also continued to feature the cape over Ezio's left arm and shoulder with a leather spaulder.[2]

The customization system had been improved, with the opportunity to dye the cape separately to the main body of the robe, allowing for many color combinations. Most of the previous dye colors had returned, although some of them had been renamed, along with a new batch of Roman-based colors.[2]

Again, the armor system allowed for further customization with four armor sets: the Roman, Rondelle, Plate, and Seusenhofer armors (with similar strengths to Leather, Helmschmied, Metal, and Missaglias respectively), which could all be used in any combination. The Auditore, Medici, and Venetian capes also returned, with the addition of the Borgia cape, though the standard cape was the only one which could be dyed.[2]

By 1511, Ezio had once again changed his outward appearance, having a set of robes designed for traveling to Masyaf. Unlike his previous outfits, they were largely gray in color, rather than the usual Assassin white, and had a gray-white fur padding on the left shoulder and under both bracers, as opposed to the leather his previous outfits had. Ezio chose to wear a dark blue scarf around his neck to protect himself from the extreme weather.[3]

After being ambushed by a large group of Byzantine Templars upon arriving at Masyaf, Ezio removed his cape before combating his attackers, and he did not replace it afterwards.[3]

The robes also bore the Constantinople Assassin insignia and a small, adorned buckle in a shape of diamond, which connected the belts which crossed over his chest. There was also an upside-down Assassin insignia on the tip of the hood. Additionally, small patterns appear to be imprinted on the grey fabric of the robes.[3]

The robes could once again be dyed with any color that a tailor had to offer, with color combinations designed to fit the Turkish setting. New armor sets were also available at the blacksmith shops, being the Azap, Mamluk and Sepahi sets.[3]

As Ezio chose not to carry a cape with him, he would not be able to dye it in Constantinople, as opposed to the tailors in the Italian cities before.[3]

The customization menu for Giovanni's robes 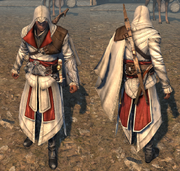 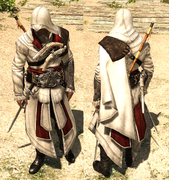 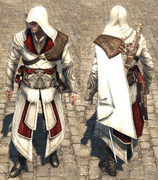 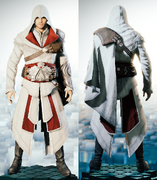 Ezio's Assassin robes as seen in Assassin's Creed: Origins
Add a photo to this gallery

Retrieved from "https://assassinscreed.fandom.com/wiki/Ezio_Auditore%27s_robes?oldid=872348"
Community content is available under CC-BY-SA unless otherwise noted.