"Divination through numbers. There is a pattern to existence. To comprehend the calculations is to tame time. This was my focus. And so I built the Eye to aid us. But she turned it towards her own ends."
―Minerva to Desmond Miles, 2012[src]

An Eye was a set of Isu technology that granted the Isu the ability to foretell the future through the calculations of innumerable possibilities. Created by the Isu scientist Minerva, the Eyes were described by her as "divination by numbers" and were so precise that its users could anticipate exact responses to their recordings in the future. In this way, they could interact with future beings as though they were speaking to them in real-time, allowing them to influence the future.[1]

One component of an Eye was discovered by humans and became known as the Antikythera mechanism.[2]

While working alongside Juno and Jupiter to investigate solutions for the pending catastrophe in 75,000 BCE, Minerva used the first Eye in an effort to save the world from the innevitable second disaster which she had calculated to take place in 2012 CE. With the Eye, she identified Desmond Miles as the individual who would be most likely of preventing the disaster.[1]

Knowing Desmond would eventually relive the genetic memories of his ancestor Ezio Auditore da Firenze through an Animus, Minerva used the Eye[1] to appear before Ezio in the Vatican Vault on 28 December 1499 with a message for his descendant, warning him of the impeding solar flare.[3] Eventually, Juno began to tamper with the device, prompting Minerva and Jupiter to destroy it and imprison Juno inside the Grand Temple.[1]

After Juno was imprisoned, Minerva created a second Eye to reach out to Desmond once more on 21 December 2012, to determine whether he found a solution to prevent a second disaster. She discovered that Juno, whose consciousness had been digitally stored inside the temple, had been manipulating Desmond. Minerva urged Desmond not to use the global aurora borealis device, which would save the world from the solar flare but also free Juno from imprisonment, claiming that the world's destruction was better than Juno's release. In the end, Desmond decided to save the world, trusting that humanity would be able to counter Juno's threat.[1]

In 2013, after researching the Eyes, Abstergo Industries discovered that the devices would have been extremely difficult to use due to the nature of the calculations, and would have required hundreds of thousands of trials to calculate events so far in the future.[2]

In 2018, the Assassin Layla Hassan and her assistant Alannah Ryan mistakenly identified the global aurora borealis device as the Eye and corresponded as such in their research notes on Aletheia.[4] 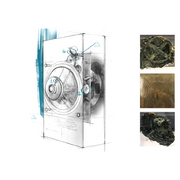