Excalibur, also known in Welsh as Caladfwlch, was one of the Swords of Eden, bladed artifacts created by the Isu scientist Hephaestus to use in the fight during the War of Unification. These Pieces of Eden granted their bearers great power and leadership, and were later used by influential humans in battle.

Excalibur was created by Hephaestus, "the maker", during the Isu Era to bring about the end of the War of Unification.[2] At some point after; it was later taken to Britain in what would become England.[3]

By the 5th or 6th century, the Sword had become lodged in a stone. During that time, it was later pulled out of the stone by the young Briton leader named Arthur Pendragon who, with backing from the local chapter of the Order of the Ancients,[3] used the blade to rally his people as the newly crowned high king of Britain to fight in defense of their lands against the invading Anglo-Saxons.[1] However, he was later betrayed years after, ultimately leading to his death.[5] The sword, which was then considered one of the thirteen Treasures of Britain, was then hidden in an Isu vault beneath the Myrddin's Cave in Hamtunscire and locked in place, only to be released by returning 12 tablets scattered throughout England representing the other Treasures to the mechanism.[3]

Nearly three hundred years later in the late-9th century, Excalibur was recovered and claimed by the Viking shieldmaiden Eivor Varinsdottir of the Raven Clan,[3] a Norse clan that relocated to England to escape the rule of a unified Norway under its first king, Harald Fairhair.[6]

Arthur draws the Sword from the Stone by Walter Crane 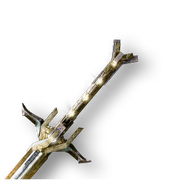