Assassin's Creed Wiki
Register
Don't have an account?
Sign In
Advertisement
in: Articles that need updating, Individuals, Individuals who held Pieces of Eden,
and 5 more

Eve (born bef. 75,000 BCE), also known as Lífþrasir,[1] was a hybrid and leader of the human rebellion against the Isu during the Human-Isu War. As a fighter for humanity's free will, she is considered one of the first proto-Assassins, along with Adam.[2]

Eve was born to the Isu scientist Phanes, head of Project Anthropos—which led to the creation of humanity—and a human woman. Before her birth, her parents fled the city of Eden and took refuge in Atlantis. Upon discovering their pregnancy, and fearing that their child would be taken captive and experimented on by the Isu, Eve's parents went to great lengths to shield her from Isu society.[3]

In 75,010 BCE,[4] Eve ignited a rebellion against the Isu by stealing an Apple of Eden. Unaffected by the effects of their Pieces of Eden due to the lack of necessary neurotransmitters in her brain, she then proceeded to wake another hybrid, Adam,[5] following which the pair attempted to escape Eden.[6]

Later, Eve was chosen as the official leader of humanity's rebellion against their creators, and a holographic record of her election on a Prophecy Disk before the Great Catastrophe, which destroyed most parts of the Earth and nearly killed every humans and Isu.[7]

Eve and Adam were the parents of Cain and Abel, the former of which would later kill his brother in order to acquire his Apple of Eden.[8] Some future Templars, the sworn enemies of the Assassins, would later come to see themselves as the "Children of Cain".[9]

Later, Eve was seen by the Abrahamic religions as the first woman and the ancestor of all humans. Her story of taking the Apple of Eden was altered as an act of disobedience against God, resulting in what became known as the "fall of man" from the Garden of Eden. During the Renaissance, Eve also became an artistic subject as many events of the Bible. The German painter Albrecht Dürer made a painting of Eve.[10]

Two parts of the Prophecy Disk were hidden in two Isu Temples under the site of Chichen Itza in Mexico. The third part, the Heart of the Brotherhood, was in the possession of the Saint-Domingue Brotherhood of Assassins during the beginning of the 18th century. Around 1744, the African slave Jeanne stole the Heart after she refused to join the Brotherhood. She was sold to the French merchant Philippe de Grandpré and reinstalled together in New Orleans where she became his placée and gave birth to their daughter Aveline. Madeleine de L'Isle, the leader of the Louisiana Rite of the Templar Order, searched for the Prophecy Disk. In 1752, she married Philippe de Grandpré to approach Jeanne. Five years later, she convinced Jeanne to go with other slaves to Chichen Itza, promising them they would be free and protect by the Templars. In fact, Madeleine wanted a workforce to excavate the Prophecy Disk. Before leaving, Jeanne gave to her daughter the Heart.[11]

In 1769, Aveline, now member of the Louisianan Assassins, investigated the disappearance of the slaves and found both the first part of the disk and her mother.[12] In 1772, she returned in Chichen Itza and found the other half.[13] In 1777, Aveline discovered that her step-mother was the leader of the local Templars. She convinced Madeleine that she wanted to join the Templars and gave her the broken disk. During the induction ceremony at Saint Louis Cathedral, Aveline killed all the Templars and Madeleine, then activated the Prophecy Disk and witnessed the election of Eve.[7]

The Fall of Man, by Hugo van der Goes

Satan Watching the Endearments of Adam and Eve, by William Blake

Adam and Eve Driven out of Eden, by Gustave Doré 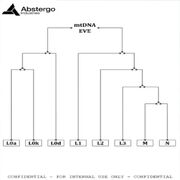 A phylogenetic tree for the Mitochondrial Eve