Esiocles, also known as Esio, was a Greek resident of Cyrene who lived during the 1st century BCE.

Around 47 BCE, whilst playing outside of the Temple of Zeus, Esiocles witnessed the Medjay Bayek of Siwa, performing a Leap of Faith off of the temple's rooftop. Capturing Bayek's attention, Esiocles convinced the Medjay to entertain a group of the city's children by leaping off of various city landmarks' rooftops, including the city baths, the Temple of Apollo, and the Roman Akropolis. Upon completing the final jump, Esiocles bestowed upon Bayek the title "Flea of Cyrene".[1]

Years later in 38 BCE, Bayek encountered an Esiocles living in a village south of the Valley of the Kings, in Upper Egypt, and was dismayed to learn that he was pursuing a career as a smuggler. Not wanting Esiocles to lead a life of crime, Bayek convinced him to abandon that path and to seek out a friend in Rome who would keep his "idle hands busy."[2] 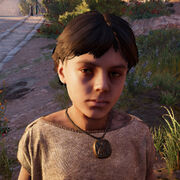 Closeup of a young Esiocles

Render of a young Esiocles