"The journey before me is long and hard, but I will see Saint-Domingue freed. For papa. For you. For all of us. Please guide me to victory."
―Eseosa in his first letter to Adéwalé.[src]

Eseosa (born 1757) was a member of the Saint-Domingue Brotherhood of Assassins, and a leading figure of the Haitian Revolution. He was the son of the Assassin Babatunde Josèphe, the grandson of Adéwalé and Bastienne Josèphe, and is an ancestor of Milton Jones.

A friend of Dutty Boukman, he was also responsible for recruiting Toussaint Louverture, who led the liberation of Haiti's slaves from their masters. Eseosa wrote a Codex to his deceased grandfather during the events of the revolution.

Eseosa was born in Port-au-Prince in 1757 to an Edo mother and Babatunde Josèphe, a Haitian of Yoruba descent. By 1776, Eseosa had rebuilt and reformed the Assassin Brotherhood in Saint-Domingue. He hoped to succeed where François Mackandal's Assassins had failed, in creating a nation where black and white citizens lived alongside one another.

He recruited Georges Biassou, Dutty Boukman, and Toussaint Bréda, for whom Eseosa arranged to be freed from slavery, to accrue resources for the Assassins. He also sent a request for help to Guillaume Beylier, a member of the French Assassins, but Beylier responded that with their own problems brewing, they were unable to send reinforcements.

By 1791, as the revolution commenced, Toussaint, using the training Eseosa gave him, took command of Biassou's troops. However, their fellow commander Jeannot Bullet massacred white and mulatto civilians, violating the Creed. Biassou and Jean-François Papillon, the third commander appointed by Boukman, captured Bullet, and Eseosa sentenced him to death.

Two years later, Eseosa acted as trainer for Toussaint's men, and maneuvered him into the position of leadership by secretly instigating violent uprisings only his men could subdue. The year after, the Revolutionary government abolished slavery, but Eseosa and Toussaint's work was not over, as the British and Spanish tried to claim Saint Dominigue: Papillon and Biassou sided with the Spanish, leaving Eseosa saddened.

By 1801, after ridding themselves of the Templar governor Jean-Louis Villatte, Toussaint became absolute ruler of Saint-Dominigue. Under his command, Eseosa helped conquer the Spanish territory of Hispaniola, bringing the entire island under their control and liberating all of its slaves.

Napoleon Bonaparte, First Consul of France, saw Toussaint as undermining his authority, and sent General Charles Leclerc to remove him from power. Leclerc claimed he was not revoking abolition, but Eseosa retrieved orders from Napoleon revealing they planned to disarm the black soldiers and force ex-slaves to return to working on plantations.

By May 1802, Leclerc emerged victorious over most of the rebel leaders, and Toussaint surrendered himself, agreeing to be deported to France. Eseosa wrote a letter to the Assassins there to free him, but he received no response, and Toussaint died in prison a year later.

However, Leclerc opted not to disarm Toussaint's troops, allowing them to rise up again. Eseosa poisoned Leclerc, using a special mixture devised by Mackandal to give him yellow fever-like symptoms. By 1804, Toussaint's lieutenant Jean-Jacques Dessalines drove the French out of the colony and became the new ruler of an independent Saint-Dominigue, but marked the beginning of his brutal reign by exterminating the white colonists and Creole inhabitants.

Appalled by what he had witnessed, Eseosa accepted an invitation from Connor, leader of the Colonial Assassins and grandson of Adéwalé's captain Edward Kenway, to receive additional training at the Davenport Homestead in Massachusetts. He vowed to return to kill Dessalines.

Eseosa did not practice Voudou like Dutty Boukman, but they shared a belief in a distant god that meant they had to turn to spiritual guidance from angels, saints or ancestors; thus, Eseosa wrote his Codex as a way to pray to his grandfather for strength.

Eseosa described himself as proficient in military tactics, but lacking in political skills, which was why he recruited Toussaint into the Brotherhood.

Eseosa greatly looked up to his grandfather, and was proud of his heritage, vowing to free Saint-Domingue from colonial oppression. However, once the Haitian Revolution ended with Jean-Jacques Dessalines' rise to power, Eseosa felt strong disappointment, wondering if he would have let his grandfather down. 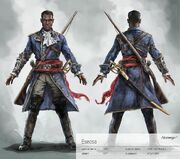 Retrieved from "https://assassinscreed.fandom.com/wiki/Eseosa?oldid=947538"
Community content is available under CC-BY-SA unless otherwise noted.