Eros is the Greek god of sensual love and desire. He is a son of Ares and Aphrodite and is the brother of Adrestia, Anteros, Phobos, Deimos and Harmonia. In the Roman mythology, he is known as Cupid. Eros is one of the Erotes, a group of winged gods, which includes also his brother Anteros. The Roman equivalent of this group is called the Cupids.

When the zodiac was created, the story of Eros and Aphrodite fleeing the monster Typhon by becoming fishes and leaping into the sea was used as the basis for the sign of Pisces.[2]

In 2012 Clay Kaczmarek included the story of Psyche and Cupid in a set of puzzles he'd hidden within the Animus for his follower to find. In Clay's puzzle it was suggested that their story was one of those in which "the seeds were planted as two worlds became one."[3] In a former puzzle, Cupid was excluded from a list of individuals known to have possessed an Apple of Eden.[4]

Cupid beside Venus in Sacred and Profane Love by Titian 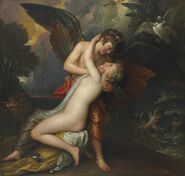 Cupid and Psyche by Benjamin West

Cupid and Pysche by Giulio Romano

Retrieved from "https://assassinscreed.fandom.com/wiki/Eros?oldid=883041"
Community content is available under CC-BY-SA unless otherwise noted.