Eogan mac Cartaigh (died c. 882), also known as The Oak, was the Abbot of Armagh during the late 9th century.

A dedicated Irish Christian priest under High King Flann Sinna's reign, Eogan was secretly the Ollamh and founder of the extremist druid cult known as the Children of Danu.[1]

Eogan mac Cartaigh was born in the 9th century, the youngest boy in a very large Irish family. From a young age, Eogan deeply valued mystical, scholarly and spiritual pursuits and therefore decided that he was destined for life in the Christian church. Due to his values, Eogan was a devout Christian and dutifully fasted, prayed and memorized religious scripture.[2]

However, he had soon realized that these pursuits had left him somewhat dissatisfied with his life and therefore he slowly began resenting every moment of his religious life. He did, however, go on pretending to be a dedicated member of Christian society and the faith in general.[2]

One day during his youth, he was exploring the wooded areas near his village and he accidentally stumbled upon an Irish druid performing a religious ritual. Upon observing the druid ritual in progress, Eogan found spiritual fulfilment in the "earthiness" of it. Reflecting upon his newfound spiritual fulfilment, Eogan decided that he found druidism much more compelling than his family's Christian faith.[2]

Eogan than secretly became a druid and secretly followed their ways more dutifully, eventually become a secluded fanatical member. With the rise of the Norse-Gaelic Christian society in Ireland, Eogan feared the druidic faith would face extinction due to the new Christian society being established over Ireland.[2]

Eogan soon founded an extremist druid cult called the Children of Danu, which primarily consisted of disenfranchised druids and Christians from Irish society.[2] Eogan himself decided to take up a high position in the Church, believing that he could use his power to help his cause by bringing down Irish society from within in order to prevent the Irish Christian society from wiping out the native druidic faith of Ireland.[3]

What started out as a secluded resistance movement for the druids eventually mutated into a cell of druid extremists who began engaging in the darker aspects of the druidic faith in order to fight off the rising Norse-Gaelic Christian Order in Ireland.[4]

Rise of a High King

Around 879, during Flann Sinna's coronation as High King of Ireland at the Hill of Tara near the ancient stone Lia Fáil, Abbot Eogan blessed him and gave him a ceremonial sword, while Flann's poetess, Ciara ingen Medba, sang a song she had written. However, unknown to most, Eogan had intended for Flann to be killed moments later by a suicidal assassin disguised as a priest, though the plan was foiled by both the King of Dublin, Bárid mac Ímair, and his cousin, the Viking jarlskona Eivor Varinsdottir of the Raven Clan.[5]

During the coronation, the Book of Kells was taken by Dublin Danes and Eivor was given the task to retrieve it. Abbot Eogan was later present in Durrow as he discussed with Flann about the implications of letting someone like Eivor retrieve the book. Nevertheless, Eogan was handed the book by Eivor, while Eogan questioned Flann for his collaboration with the "pagans." Later, Eogan left with the book.[6]

After Eivor helped Flann and Bárid conquer Cashelore,[7] the next day came and Bárid was unjustly framed for treason via poison. Going to clear Barid's name, Eivor and Ciara went to Ciara's friend and druid priestess, Deirdre Na Linni, and later found out that the Children of Danu was responsible for the poison. Unknown to them, Eogan and his cult tried to frame Bárid and sow discord between Flann and his allies. Venturing to find a cure component, an amber shard from a Child of Danu, Eivor investigated around Connacht, for any clues about The Wren. Working under the cryptonym "The Oak," Eogan sent a letter to The Wren, detailing about her role to sway the public's support against the lords and kings of Ireland and instigating riots. After she assassinated The Wren and stopped Eogan's plans, Eivor delivered the amber shard to Deirdre.[8]

After Ciara delivered the cure to Flann, The Cursed, who concocted the poison ordered by the Ollamh Druid, The Oak, was next on the list. Eivor followed Ciara to The Cursed and both warriors killed The Cursed. A clue was found on The Cursed's personal effects about The Oak, who worked among priests and kings.[9] From the High Druid's death, Eivor kept hunting down other Children of Danu, such as The Deer and The Whisper, who were told by The Oak to work on building supplies, increasing their numbers, and concocting poisons for their "final battle."[10]

During Flann's movement in Ulster, Eivor was told to investigate Aileach for Bárid and the missing messengers. Under the guise of a Donegal Viking, Eivor secretly invaded Aileach, found the Kings of Aileach, Niall Glúndub and Domnall mac Áeda, and an alive Bárid, and took over the settlement from the inside. From the kings' interrogation, Abbot Eogan was shown to be the mastermind and that his army was building up and marching for Clogher. Worried, Bárid sent a message to Flann about Eogan's ambush, while Eivor left to meet with Flann.[11]

At Clogher, Eivor and Bárid were in disbelief that Flann ignored the message due to his prejudice, only for Eogan's men to attack and disprove Flann's assumptions, much to his shock. Although they held their own, Flann looked around and saw the loss in numbers in his men and his ally Bárid, who was fatally injured. Preparing Bárid for Valhalla, Eivor sat and vowed vengeance as her cousin passed.[12]

Afterwards, Eivor met with the new King of Dublin, Sichfrith, and Azar to discuss the next steps for avenging Bárid and finding Eogan. Azar informed that the Children of Danu had stopped Dublin's weapon supply, under the leadership of The Seed. From her investigation and assassination of The Seed, Eivor found out the real identity of The Oak and Ollamh Druid of the Children of Danu to be Abbot Eogan himself. After her investigation, Eivor went to confer with Flann about her findings of Eogan's true allegiance.[13]

Abbot Eogan was later found to be at Armagh, as Flann and Eivor started their attack, with Sichfrith's aid. Going through the village and Eogan's men, Eivor and Flann made their way into Armagh's church, where Eogan was guarded by two soldiers. Initially, Eogan cursed out Flann and his attack on the church. However, Eogan's true intentions were made clear by Flann. Dropping the charade, Eogan made his position as leader of the Danu, while trying to sow doubt between Ciara and Flann. Eogan continued to make accusations of Flann being enamored by Ciara. Stopping the conversation, Eivor and Flann attacked abbot and his guards. After being bested in battle, in his final breath, Eogan quoted an excerpt of the holiness code detailing agricultural practices in Chapter 19 of the Book of Leviticus, and began to push the insecure thoughts between Ciara and Flann even further, before succumbing to his wounds.[14]

Immediately following the abbot's death, a conference between Ireland's kings and Flann Sinna was held about Eogan and to an extent, the druids in Ireland. After rash deliberations, Flann initially submitted to the idea of an inquisition against all druids, Children of Danu or not, to either reform as Christians or be exiled. Ciara, hearing this, left angrily and bereft at Flann's decision. Ciara soon activated the Lia Fáil to stop anyone after her people as Eivor and Flann came to reason with her. After a series of fights, Eivor told Ciara that the Children of Danu's wish had come true, even with Eogan's death, as they had made Ciara activate the stone for the druids. Putting a stop to the stone, Eivor saw its power was destroyed.[15] 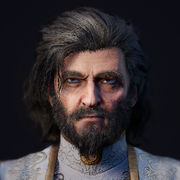 Concept art of Eogan in his ceremonial abbot robes

Concept art of Eogan in his standard abbot robes 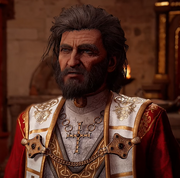 Eogan mac Cartaigh is a character introduced in Assassin's Creed: Valhalla's Wrath of the Druids DLC. Historically, the abbot of Armagh during this period was Cathassach mac Robartaig who died c. 883.

The name "Eogan" may be a variation of the Eoghan which is Gaelic in origin, meaning 'born of yew; youth'. The surname "mac Cartaigh" is a common Irish surname meaning 'son of Cárthach', with Cárthach meaning 'loving'. The surname later evolved into the modern name of MacCarthy.