"I hate these things. Why do people dress up to act like animals? I hate the hipocrisy of it all. "Honorable" General Rouxel has killed tens of thousands of slaves. And I hate waiting"
―Elsie thoughts on Dutty's execution, while waiting for Fabien to save him.[src]

Elsie was a member of the Saint-Domingue Brotherhood of Assassins active in Saint-Dominigue during late 1791.

She was an ancestor of the 21st century Assassin Charlotte de la Cruz.

Elsie was present during the execution of Dutty Boukman, whom she intended to save until she was persuaded by fellow Assassin Fabien, who had received orders to allow the execution to happen. Though reluctant, Elsie agreed to let the execution happen and recover Dutty Boukman's book later.[1]

In 2016, Elsie's genetic memories were relived by her descendant, Charlotte de la Cruz while in Mexico City.[1] 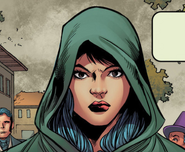