Elpidios (born c. 422 BCE) was the son of the Spartan misthios Kassandra and her lover Natakas.

As a result of his parentage, Elpidios had Spartan and Persian ancestry. His paternal grandfather was Darius, and his maternal great-grandfather was Leonidas I of Sparta. Elpidios would also become the ancestor of Amunet, one of the Hidden Ones' founders.

Elpidios was born around 422 BCE, when Kassandra, Natakas, and Darius decided to stop running from the Order of the Ancients and settle in Dyme, Achaia.[1]

Deeming Elpidios' parents to be too dangerous for his upbringing, Amorges, the leader of the Order of Dominion, had Natakas killed and kidnapped Elpidios. Travlleing to an island south of Messenia, he entrusted the baby to Darius II, the son of King Artaxerxes I of Persia who had been forcefully overthrown and exiled.[2]

Elpidios was later handed over to Kassandra, who learned her child's whereabouts from Amorges before his death. Owing to her lineage as a Tainted One, Kassandra came to the conclusion that Elpidios would never be safe with her and thus made the decision to let Darius take away Elpidios somewhere safe.[2]

Darius became a guardian to Elpidios, taking him to Egypt to lead a new life. Elpidios would eventually become an ancestor to Aya of Alexandria and her son Khemu.[2][3] 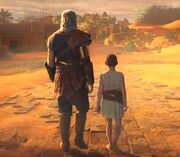 Darius and Elpidios in Egypt 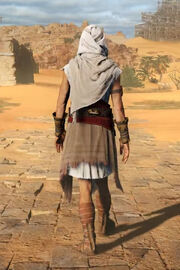 Grown-up Elpidios
Add a photo to this gallery

Retrieved from "https://assassinscreed.fandom.com/wiki/Elpidios?oldid=829331"
Community content is available under CC-BY-SA unless otherwise noted.