Elizabeth I (1533 – 1603), born Elizabeth Tudor, was the Queen of England and Ireland, reigning from 17 November 1558 until her death. She was the daughter of Henry VIII of England by his second wife Anne Boleyn and was the half-sister of Mary I. She was the last monarch of the House of Tudor and was succeeded by her cousin James VI of Scotland.

Seeking to help Elizabeth ascend the throne,[1] the Assassins killed the Templar affiliated Queen Mary in 1558.[2] By 1559, Elizabeth had come into the possession of an Apple of Eden, which she kept hidden inside a globus cruciger.[3] She remained a close ally of the Assassin Brotherhood.[4]

In 1600, Elizabeth issued a Royal Charter that allowed the founding of the East India Company.[5]

The mathematician and consultant of Elizabeth, John Dee, knew of the Apple and its powers. After her death in 1603, Dee sent a painting of Elizabeth wielding the artifact during the Judgement of Paris to Elizabeth Jane Weston, the stepdaughter of his former colleague Edward Kelley, as a wedding present.[6]

Details of Elizabeth I's Apple were later collected by the Assassin Clay Kaczmarek in 2012 and hidden in the Animus for his successor, Desmond Miles to find.[3] Which he did in September of that year.[7]

Elizabeth after the defeat of the Spanish Armada 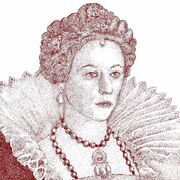 Elizabeth I in Who's In Your Blood?
Add a photo to this gallery

Retrieved from "https://assassinscreed.fandom.com/wiki/Elizabeth_I_of_England?oldid=882778"
Community content is available under CC-BY-SA unless otherwise noted.