During the 1st century BCE, elephants were used by wealthy Egyptians as transportation means, showing off their wealth, and as animals of war.[1]

In the mid-1st century BCE, the Medjay Bayek of Siwa encountered and killed several war elephants used by bandits and Romans across Egypt; Jumbe in the Herakleion Nome, Surus in the Green Mountains, Qetesh and Resheph in the Uab Nome, and Herwennefer in the White Desert Oasis.[1]

Bayek also faced down and killed two other war elephants during the Battle of the Nile in 48 BCE. First while riding in a chariot with Julius Caesar to the Roman fleet, and the other as Pothinus, the regent for Ptolemy XIII and a member of the Order of the Ancients, rode one named Yugr Tn during his fight against Bayek, some days after the attack on Alexandria.[2]

In 1841, elephants were adorned and kept in the gardens of Ranjit Singh's summer palace in Amritsar, India. Infiltrating the palace, the Assassin Arbaaz Mir took advantage of the elephants' size in order to hide from the guards.[3]

Unnamed war elephant used during the battle of the Nile 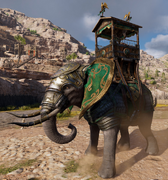 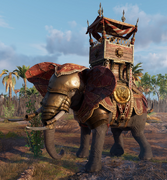 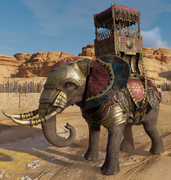 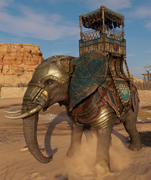 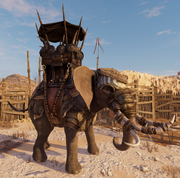 Retrieved from "https://assassinscreed.fandom.com/wiki/Elephant?oldid=757145"
Community content is available under CC-BY-SA unless otherwise noted.