"Caution's nothing without charisma! If a man plays the fool, then it's only fools he'll persuade. But appear to be the devil... and all men will submit."
―Edward Thatch to Edward Kenway, 1718.[src]

Edward Thatch (c. 1680 – 1718), also known by the alias Blackbeard, was an infamous English pirate captain who sailed the West Indies and the eastern seaboard of the American colonies during the early 18th century, aboard the ship Queen Anne's Revenge, being one of the most respected crime lords of the time.

In 2013, his genetic memories were used as an Animi Avatar by the entertainment branch of the Templar company Abstergo Industries, to influence the general public via the Animus game console, under the title of Blackbeard.

Edward Thatch was likely born in Bristol, England, in 1680. Little is known of his early years until the War of the Spanish Succession in 1701, when he served as a privateer for the Royal Navy in the Caribbean.[1] During the war, Thatch met Benjamin Hornigold, Edward Kenway and Charles Vane.[2]

In January 1713, Thatch and his crew came to the rescue of the Amazon Galley, a ship belonging to the East India Company, when it was being boarded by the crew of the Emperor. The pirates were soon overpowered by the privateers and the soldiers, and only two of them were left alive. Blaney, one of the remaining pirates decided to join Thatch's crew, and asked if he could kill Edward Kenway, the other survivor. Thatch told them to have a fistfight instead, with Kenway emerging victorious. However, when Blaney attempted to cheat, he was shot by Thatch, and Kenway was recruited into Thatch's crew.[3]

With the advent of peace in 1713, Thatch was, like so many other privateers, denounced by his government and left to fend for himself. Eventually he turned to piracy to make his living, serving as Hornigold's quartermaster between 1714 and 1716.[1]

Kenway: "You don't do nothing subtle, do ya, Thatch?"
Thatch: "Legends ain't born from mildness."
—Edward Kenway and Thatch, 1718.[src]

In 1715, Thatch, Hornigold and James Kidd met with Edward Kenway in Nassau. There, the four discussed their plans to free the city of its British garrison and turn it into their very own Pirate Republic. Thatch, with the assistance of Kenway, arranged for the capture and subsequent use of a Spanish galleon, El Arca del Maestro, as a fortified defense of one of the island's harbors, beaching it on nearby Abaco Island.[2]

By 1717, having grown his beard to transform himself into the character of "Blackbeard", Thatch commandeered a ship called the Adventure - captained by Stede Bonnet - for himself. Allowing Bonnet to remain aboard as a protégé, Thatch commanded the ship for two months when he captured the French slave ship La Concorde. Renaming her Queen Anne's Revenge in honor of the late Queen, he armed the frigate with over forty cannons, thereby becoming one of the most feared pirates in the West Indies.[2][1]

In early 1717, Thatch encountered three ships that belonged to his friend, Samuel Bellamy and his associates, Olivier Levasseur and Alonzo Batilla in the Grand Bahamas. They were engaged in an uneven fight against the King George, a British Man O'War led by the Templar Captain Francis Hume. Thatch decided to assist them by firing a broadside into the Man O'War, allowing Batilla to destroy the battered ship by shooting at its weak spots. Leaving as soon as he arrived, Batilla questioned his identity before leaving.[4]

Later that year, he met Batilla again at La Boca del Diablo and informed the pirate about Bellamy's death in a storm and the wreckage of Levasseur's ship, Le Postillon. The two pirates then sailed to the shipwreck and investigated the site. Batilla discovered the Templars' involvement in the attack and told Thatch about the Templars and their attempt to rule the seas. Before sailing back to Nassau, Thatch informed Batilla of a slaver fort where the young pirate might find out more about Levasseur's attackers.[4]

At the start of 1718, Thatch once again met with Hornigold and Kenway to discuss the stagnation in growth that had hit Nassau. They determined that the town needed medicines to survive, but that attacking British warships to obtain said medicine was likely to draw too much attention, especially given the Crown's renewed focus on eliminating the pirate threat in the Caribbean.[2]

Despite these circumstances, Thatch's displeasure with their immediate success, or lack thereof, spurred him into assaulting a British Man O' War to take its medicine supply. He subsequently had to be saved by Kenway, who helped him to capture the ship.[2]

Thatch and Kenway traveled to the British colony at Charles-Towne in order to procure a large amount of medicine, which had been sourced to the town by a box found in the captured Man O' War. By the time Kenway arrived, the Queen Anne's Revenge had been blockading the town for seven days and had taken several hostages, encouraging Charles-Towne to surrender its medicine. To Thatch's disappointment, there had been no response, and the party he sent to bargain with the governor had not returned.[2]

With Kenway's arrival, they successfully procured the needed medicine. However, when Kenway suggested they return to Nassau, Thatch declined, saying he would be traveling north for business. Kenway inferred that Thatch had no plans to return to Nassau, which Thatch confirmed, saying that he intended to go into retirement.[2]

"In a world without gold, we might have been heroes!"
―Edward Thatch's final words, 1718.[src]

Thatch accepted a pardon from Charles Eden, governor of North Carolina, but quickly resumed piracy to gather more funds for his retirement. Alexander Spotswood, the governor of Virginia, became aware of his continued piracies, and paid Lieutenant Robert Maynard to get rid of him.>[1]

After the blockade of Nassau by British forces, Kenway and Vane tracked Thatch down to Ocracoke to convince him to return, to no avail. While Vane swore him off, Kenway was more understanding, saying he did not begrudge Thatch his choice. In thanks, Thatch informed him that the Sage Bartholomew Roberts was rumored to be sailing on a slaver ship called the Princess.[2]

Later that evening, two Royal Navy vessels under Maynard launched an ambush, destroying the small settlement as well as the ships anchored in the harbor, including the Queen Anne's Revenge, which forced Thatch and Kenway to make their escape aboard the Jackdaw, the only ship to survive the attack. The two soon realized, however, that they would need to capture the attacking Man O' War in order to leave safely, and subsequently boarded it.[2]

Despite their best efforts, the pirates were soon overwhelmed; surrounded and outnumbered, Kenway saw that Thatch was in danger and threw him a pistol, but Thatch was slain in the back and beheaded after a prolonged and bloody engagement, though Kenway and Vane were able to escape.[2]

"That's some soft talk coming from a pirate. And as it happens... I mostly agree."
―Thatch on Adéwalé's desire to avoid attacking merchant ships.[src]

Thatch was a warm and avuncular man who despised the corruption of the British bureaucracy and cared deeply about building an independent state for dispossessed privateers like himself in Nassau. Although the Pirate Republic fell into squalor, he went to tremendous lengths to find medicine for his disease-ridden brethren, until the point he felt his age was catching up to him and left.[2]

The demonic persona of Blackbeard was crafted by Thatch to avoid actually using violence to intimidate his enemies. He bolstered his formidable image by performing stunts such as lighting fuses in his hair, pouring gunpowder in his rum, or forcing his crew to work below deck as he burned sulfur to prove he was the hardiest of all of them. He grew out his beard partly to make himself all the more iconic. Thatch was also a very authoritative presence as even in the presence of Edward Kenway and Charles Vane, Kenway admitted there was no question he ruled over Nassau.[2]

Unfortunately, Thatch's fearsome reputation caught up to him when the British attacked and killed him, just as he was retiring. Thatch also genuinely cared for Edward Kenway treating him as a student and mentoring him in all matters of sailing and piracy, he also tried to discourage him from joining captain Able Bramah's foolish quest for gold, so much so that he once threatened Bramah with a pistol.[2]

Thatch was a experienced sailor and captain from years as a member of the royal navy as well as a pirate. Thatch was a master of intimidation cultivating an appearance to strike fear into his enemy's so much so that they would rather give up than fight. Thatch was also a highly skilled swordsman besting many members of the royal navy as well as training Edward Kenway into a master swordsman. He was also a skilled marksman once striking a sailor named Blaney square in the forehead to save Kenway's life. Thatch also seemed to have a near inhuman endurance as it was noted that during his final battle he was shot no fewer than five times and suffered twenty cutlass wounds. In terms of equipment Thatch wore duel cutlasses and four to six pistols over his chest, he also carried a dagger on occasion.[2] 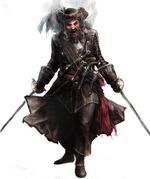 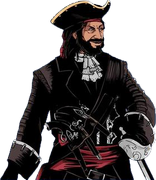 Thatch as he appears in Assassin's Creed: Pirates

A painting of Thatch's final moments

Thatch screaming at a British soldier

Thatch and the others in Salt Key

Thatch arguing with Vane over the king's pardon

Edward meeting with Thatch in the Caribbean

Thatch putting his fiery hat on

Thatch speaking to the hostages

Thatch with Kenway in Ocracoke

The soldiers killing Thatch
Add a photo to this gallery

Retrieved from "https://assassinscreed.fandom.com/wiki/Edward_Thatch?oldid=840022"
Community content is available under CC-BY-SA unless otherwise noted.