The Echoes of Valhalla is an audio documentary series accompanying the launch and release of Assassin's Creed: Valhalla. Released on Spotify as a podcast, it comprises of 5 episodes each covering the aspects and stories of the Vikings and their invasion of the kingdoms of England. The first episode was first released on 29 September 2020, with the rest released on 5th October 2020. On 24 March, 2022, the series rebranded as Echoes of History and updated to include five more episodes about the Norse myths on Ragnarök to accompany the release of Valhalla's downloadable expansion, Dawn of Ragnarök.

Echoes of Valhalla podcast series is divided into five episodes of 15 minutes each and offers the first immersive audio historical documentary series in audio for Assassin's Creed. Comedians, well-known experts and reconstructed scenes, will bring to life the glorious eras of the Vikings, as you have never heard before.[1]

Inspired by Ubisoft's famous video game series "Assassin's Creed", the Echoes of History podcast offers a deep and fascinating dive into history. Through storytellers and historians, discover the most epic mythologies, relive the most important times of our history and meet the most extraordinary characters. With Echoes of History, the past has never been more alive.

Who are the Vikings? Share the way of life, customs and beliefs of these men of the North. Understand exactly what is going to urge them to leave their lands and magnificent lands [sic] to risk it all for the chance to find fame and fortune.

Embark on a Viking ship, travel the seas, overcome huge waves and dodge lightning! Feel the fear in an untamed ocean. If you let yourself be carried away and stave off hunger, you may be lucky enough to see earth appearing on the horizon...

Set off with the Great Army to conquer English Kingdoms. Find yourself in the midst of a conquest, battles and pillages. Also discover some very special ordeals reserved for a few unhappy prisoners...

10 years after the conquest and your very first victories, it's time to start building! It's time for setting down roots, from colonisation to trade. But in England, some are still resistant, still fighting your presence...

Viking attacks continued in England, but Alfred the Great and his troops fought back. Maybe it's time for you to go and discover the rest of the known world?

Norse mythology is a very rich universe, deeply ingrained in the traditions and customs of the Middle Age Scandinavian peoples. Gods and men walk alongside giants, elves, dwarfs [sic] and all manners of magical creatures. This world was created by the powerful Odin and his brothers from the body of a giant. The start of a mythical and breathtaking adventure.

Odin created Asgard, the kingdom of the gods, but that doesn't mean he's resting on his laurels. The father of all things watches over the nine realms, placed in a delicate balance atop the world tree Yggdrasil. These realms are full of mythical creatures, some peaceful, others less so. So, the gods of Asgard must soon face their first conflict.

Nestled in their kingdom of Asgard, the Norse gods watch over Midgard, the realm of men. There are numerous threats coming from the nine realms, starting with the giants whose taunts and provocations become more and more frequent. Fortunately, men and gods can count on Odin and his powerful son Thor to repel the attacks. And when the god of thunder brandishes his hammer Mjölnir, it’s usually the start of a great adventure.

In Norse mythology, Loki has a place of his own. Taken into Asgard as an infant, he grew under the protection of Odin. Rival and friend of Thor, he prefers illusions to sheer force. His magical talents are very useful in Asgard. Little by little, however, Loki turns evil and his tricks do not amuse anyone anymore. In the end, the god of discord will turn against the other gods fighting Ragnarök.

After spending a lifetime battling giants and feasting plentifully between adventures, the gods of Asgard must now face their doom. Ragnarök, Twilight of the Gods, is looming... Across the nine realms, natural catastrophes are striking everywhere and the final battle against the giants is drawing ever closer. The time has finally come for Odin, Thor, and the other Æsir to don their armour and face their destiny. 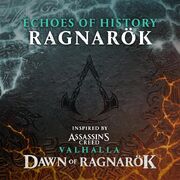 Echoes of Valhalla- Episode 1 - The Sons of the Great North

ECHOES OF HISTORY - RAGNARÖK EP 3 - Exploits of the gods

ECHOES OF HISTORY - RAGNARÖK EP 5 - Ragnarök, Twilight of the Gods