Eagles are large birds of prey primarily found across the globe and are classified under the bird family Accipitridae.

Eagles play an important role to the Assassin Brotherhood, in that many of the Order's outfits and weapons bear resemblance to eagles in their details, and the birds tend to perch on the Viewpoints which the Assassins use to navigate their surroundings and perform Leaps of Faith from. In this regard, the Assassins dubbed the sixth sense that belonged to some of their members as "Eagle Vision".

According to a story, Ajax, a legendary Greek hero, had a golden eagle feather, gifted to him by the god Zeus.[1]

Jupiter, a member of the Isu, wore a helmet that resembled an eagle.[2] When he was later worshipped by the Romans, this connection remained, with eagle becoming one of the god's sacred animals. This was also true for Zeus, the Greek equivalent of Jupiter.[3]

During the Peloponnesian War, in Ancient Greece, the legendary Spartan misthios Kassandra had an eagle companion named Ikaros, and the bird could perform reconnaissance for her. Due to their relationship, Kassandra gained the epithet "the Eagle Bearer".[3] This epithet was also claimed by an impostor.[4]

The Medjay who later became the founder of the Hidden Ones, Bayek of Siwa, used his eagle companion Senu to scout enemy camps before attacking.[5]

Whilst on her travels in Vinland, Viking shieldmaiden Eivor Varinsdottir encountered bald eagles in the wild.[6]

Ezio Auditore da Firenze collected eagle feathers for his younger brother, Petruccio. Following Petruccio's death in 1476, Ezio continued to collect feathers in memory of his brother, placing them in a box in his mother's room at the Villa Auditore;[7] he continued this tradition following the Siege of Monteriggioni, gathering the feathers into a box at the Tiber Island headquarters.[8]

The Kanien'kehá:ka revere eagles, and use their feathers in coming-of-age rites. During his coming-of-age, Ratonhnhaké:ton communed with Juno with a Crystal Ball, and the two spoke in the form of eagles. This conversation led Ratonhnhaké:ton to depart from his village and join the Assassins, though he would still collect feathers in remembrance of his home. Achilles Davenport, Mentor of the Colonial Assassins, had a stuffed eagle preserved in his room on the Davenport Homestead.[9]

In an alternate reality, Ratonhnhaké:ton underwent a vision journey where he communed with the spirit of the eagle, gaining the power to turn into one and fly short distances.[10] 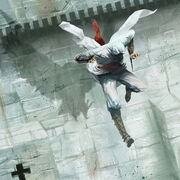 Concept art of Altaïr emphasizing the eagle silhouette of his robes